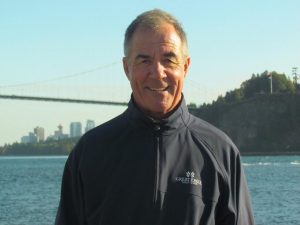 After a career practicing dentistry in West Vancouver, Hamilton-born Dan Green studied creative writing at UBC. He has two published books to his credit, the latest title being Teeth, Lies & Consequences (Red Tuque $19.95). The story begins in the mayhem and horrors during World War II and its aftermath. Friedrich Mueller, a well-off dentist living in Germany, is caught concealing his Jewish ancestry and must swear a secret oath to escape the gas chambers of Auschwitz. He flees to Palestine with his wife where they open a dental practice in the Jerusalem’s Old City. They practice equality and tolerance and in the process adopt Frankie, an Arab boy, only to be caught up in the sectarian violence that swept through the Middle East in 1948. The family escapes to California where Frankie grows up and follows in Friedrich’s footsteps by becoming a dentist. Initially successful serving famous Hollywood people, his life spins out of control and he travels back to Gaza to re-connect with his Arabic heritage. Things don’t go well for Frankie and he is arrested as a terrorist and murderer. Friedrich rushes to his son’s rescue only to find that, in order to save his son’t life, he must divulge the secret oath he took back in the 1940s. Dan Green continues to live in West Vancouver. He is a member of the Canadian Authors Association, The Federation of BC Writers, and the Palm Springs Writers Guild. 9781537529677