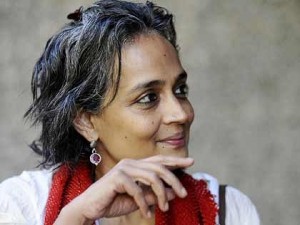 Arundhati Roy will make the closing speech to the BC Library Association’s annual convention on Wednesday, more about April 2, at the Renaissance Vancouver Harbourside Hotel, at 3 pm. Roy is a best known for her Man Booker Prize winning novel, The God of Small Things, and for activism in environmental and human rights causes. Her other works include: The Algebra of Infinite Justice (2001), An Ordinary Person’s Guide to Empire (2005), Listening to Grasshoppers (2009), and Walking with the Comrades (2011). Among her many honours are Lannan Foundation’s Cultural Freedom Award in 2002, Sydney Peace Prize in 2004, and Norman Mailer Prize for Distinguished Writing in 2011. She was featured in the BBC television documentary “Dam/age,” which is about the struggle against the Narmada dam project in India. She lives in New Delhi, India.