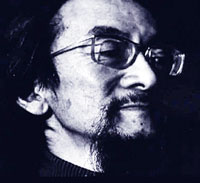 Roy Kiyooka and his then-partner Daphne Marlatt moved onto this street soon after he published his first book, Transcanadaletters (Talonbooks) in 1975. It’s where he finished Wheels, wrote The Fontainebleau Dream Machine, Pear Tree Pomes, the early draft of what later became Mother Talk and his subsequent limited-edition chapbooks which Roy Miki collected in Pacific Windows. He was revising work for Pacific Windows when he died at his computer in 1994. Marlatt still lives in the neighbourhood. Although UBC professor Warren Tallman is generally credited as the father figure for the onset of post-modern writing on the West Coast, Roy Kiyooka had a reciprocal influence at the Vancouver School of Art (1960) and later at the UBC Fine Arts department (1973-1991). After a Robert Creeley reading at UBC in 1962 and a poetry conference orchestrated by Tallman in 1963, Kiyooka switched more towards literature and photography from painting. Spoken word ‘happenings’ organized by Kiyooka and others gave rise to Intermedia Press and non-academic poets such as Gerry Gilbert, bill bissett, Ed Varney, Al Neil, Judith Copithorne, Maxine Gadd, Dwight Gardiner and Mary Beth Knechtel, some of whom became associated with the Western Front.

A UBC fine arts teacher, photographer, painter, poet and multi-media artist, Roy Kenzie Kiyooka was born in Moose Jaw in 1926. With his family he was displaced to Alberta during the Second World War and forced to take low-paying seasonal work. He never completed high school. He grew up in Calgary, studied at the Calgary Institute of Technology and Art, furthered his art studies in Mexico in the 1950s and eventually taught in most major Canadian cities. Kiyooka was introduced to abstract expressionism in 1959 at the Emma Lake workshops held by the University of Saskatchewan summer school. Although UBC professor Warren Tallman is generally credited as the father figure for the onset of experimental and post-modern writing on the West Coast, Roy Kiyooka had a reciprocal influence when he was teaching at the Vancouver School of Art (1960) and later at the UBC Fine Arts department (1973-1991). Following a reading at UBC in February of 1962 by Robert Creeley, a poetry conference was orchestrated by Tallman at UBC in 1963 at which Kiyooka became enamoured of the work of Creeley and Charles Olson, switching more towards literature and photography from painting. While Creeley stayed on in Vancouver for a year, Kiyooka began organizing readings at the Vancouver School of Art. Spoken word ‘happenings’ were giving rise to Intermedia Press and non-academic poets such as Gerry Gilbert, bill bissett, Ed Varney, Al Neil, Judith Copithorne, Maxine Gadd, Dwight Gardiner and Mary Beth Knechtel, some of whom became associated with the Western Front. This disparate ferment coincided with the growth of the TISH newsletter on the campus of UBC. The latter TISH movement or coalition has become better-known partly because its graduates have imbedded the works of fellow TISH-ites in university curriculae. An argument can be made that Warren Tallman was a Johnny-Come-Lately compared to Kiyooka who had already been involved with William McConnell’s Klanak Press, the first ongoing literary publishing enterprise in the city. [See Warren Tallman, William McConnell]

Since Kyoto Airs in 1964 Kiyooka published several avant garde works, most notably an amalgam of his own correspondence, transcanadaletters, a fairly random mixture of texts and correspondence dating from 1966 to 1975, and a 1987 collaboration with Toronto painter David Bolduc, Pear Tree Pomes, nominated for a Governor General’s Award. Robin Blaser and Roy Kiyooka were featured in Collapse #2: The Verbal & The Visual (Vancouver Art Forum Society, 1997), which examined the relationship between words and images on the West Coast. Kiyooka’s biographical tribute to his mother Mary Miyoshi Kiyooka, edited by Daphne Marlatt, was Mothertalk. The daughter of a well-educated samurai, Mary Kiyooka was born in Japan in 1896 and came to Canada in 1917 to join her immigrant husband in an arranged marriage. She died in 1996 in Edmonton at age 100.

After Roy Kiyooka died on January 4, 1994 at age 68, Roy Miki edited an award-winning collection of Kiyooka’s poetry in 1997. The Fountainebleau Dream Machine: 18 Frames from A Book Of Rhetorick. (Coach House Press, 1977)

Poet, photographer, musician and abstract painter Roy Kiyooka was, as John Bentley Mays put it, “a motive force in Vancouver’s astonishing creative incandescence of the 1960s.” Kiyooka recalled much later, “Energy was an outpouring of the Sixties with all its utopian spirit and hallucinatory drugs and strange otherworldliness and madness. And that persists in a person like me.”

Enigmatic, playful and profound as a multi-media artisan, Kiyooka continued to be a ‘motive force’ for decades, whether his experimentalism was in vogue or not.

Following his death in January of 1994, Mothertalk (NeWest Press $16.95), was published. It was based primarily on Kiyooka’s 1993 interviews with his Japanese Canadian mother Mary Kiyoski Kiyooka and included an interview with Kiyooka’s father, Harry Shigekiyo Kiyooka, whose samurai teachings had been influential on his son.

Now Kiyooka’s artistic family has gathered for All Amazed (Arsenal $19.95), co-published by the Belkin Gallery. Edited by John O’Brian, Naomi Sawada and Scott Watson, it’s based on a 2001 UBC conference with input from Michael Ondaatje, Marlatt, Watson, O’Brian, Roy Miki and others.