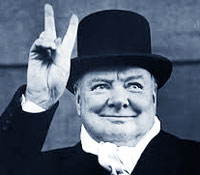 If one is making a list of world renowned writers who visited British Columbia in the 20th century–such as Tagore, Mark Twain and Dylan Thomas–one would have to include Winston Churchill who received the Nobel Prize for Literature in 1953. Two B.C. mountains are named in his honour. Winston Churchill visited Vancouver with his son Randolph and his brother Jack on September 2, 1929. He opened the Annual Provincial Exhibition in New Westminster and commended a decision to proceed with the fair despite a fire on the grounds six weeks earlier. It was, he remarked, “the culmination of a courage that does not know defeat.” He visited a logging company in Haney the next day. Afterwards he dined atop Grouse Mountain. Churchill visited Government House in Victoria on September 6, 1929. On September 9, 1929, he visited the site of the third Christ Church Cathedral in Victoria and laid a stone for its north tower at its current location at 930 Burdett Avenue. A plaque at the entrance of the cathedral honours the occasion.

Although chiefly famous as the First Lord of the Admiralty (1911-1915), Secretary of State of War (1918-1921), Chancellor of the Exchequer (1924-1929) and as the Prime Minister who successfully defended Great Britain against Hitler’s Nazism (1940-1945) and was later re-elected (1951-1955), Winston Churchill was also a gifted writer and rhetorician. His books include The History of the Second War, A History of the English-speaking Peoples, Lord Randolph Churchill, The World Crisis and other works. Winston Churchil began his public career as a journalist covering the so-called Spanish-American War in Cuba.

Many other mountains in B.C. owe their names to literary references.

— Named in honour of Shakespeare’s 400th birthday in 1965, east of Whistler, in Garibaldi Provincial Park, there is Mt. Macbeth, as well as Mt. Iago from Othello; Mt. Benvolio from Romeo & Juliet; and Angelo Peak, named for the naval officer in Othello.

— Northwest of Campbell River, separated by Montague Creek with its tributary Capulet Creek, there are two adjacent mountains, Mt. Romeo and Mt. Juliet.