Warming up to Iceland

After one day in Iceland, Harold Rhenisch's wife sat on the bed and announced she never wanted to leave. 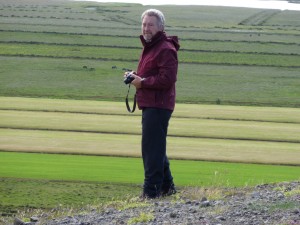 Harold Rhenisch (above) and his wife Diane felt right at home in Iceland from the get-go.

After three trips, he has produced The Art of Haying: A Journey to Iceland.

Having first travelled to Iceland in 2010, Harold Rhenisch feels Iceland has transformed him.

Iceland, he says, took the intellectual outside and beyond his bookishness to inspire him to make a very different kind of travel memoir, The Art of Haying: A Journey to Iceland (Ekstasis $33.95), with more than 200 photos.

The Art of Haying, according to Rhenisch, is about drawing a line through grass and making a new beginning from it.

“I learned that one of the ancient arts, older than poetry but as old as the art of knitting, is the art of haying,” he wrote on his blog. “…Horses have a human souls here. If you’ve never met an Icelandic horse, that might seem merely a poetic device.”

After his first visit, Rhenisch successfully applied for a writer-in-residency in Iceland at the home of Icelandic writer Gunnar Gunnarsson. Rhenisch’s father was a German immigrant raised in Germany on stories and films of farm people in much same vein as Gunnar Gunnarsson’s stories, “if not directly influenced by him.”

Harold Rhenisch’s writer-in-residency in Skriðuklaustur and his journeys around Iceland with his wife, picking bilberries for lunch, resulted in his book.

“I have no Icelandic ancestry,” says Rhenisch, “but you could say I grew up in Gunnar Gunnarsson’s books. His books sold millions of copies in Germany in the ’30s and ’40s, and he missed the Nobel Prize by a hair. The Black Cliffs was universally praised in 1932 and it was the first Icelandic crime novel.”

After visits in summer, fall and winter, Rhenisch wrote his travel memoir in which he chats with ravens, learns about knitting traditions and describes his month at Skriduklaustur, writing about the modern Icelandic sagas of Gunnar Gunnarsson. “The Nazi connection with Gunnar’s House was difficult for me,” Rhenisch says, “so, at first, I was thinking there’s no way I would stay there. But then I realized, who better, especially as he was no Nazi. It turned out to be a profound homecoming of sorts. The creative culture in Iceland is extraordinary. Plus, there are horses and rowan forests and extraordinary light. What’s not to love!

“This is a love story for a country, for a woman, and for a way of life in which the old is new and the new is old and a man frees himself from the walls that books have made in his mind — walls that he previously didn’t know were there. It’s a scary thing, to have been kept by books my whole life, and then, one day, to step outside their pastures, but that’s what happened.”

One Response to “Warming up to Iceland”

A is for Amber Cowie