The sacred sandbar at Sims Creek

A coffee table book from the Squamish First Nation joins the ranks of Stein: The Way of the River (1988) and The Great Bear Rainforest (1997) for wilderness protection. 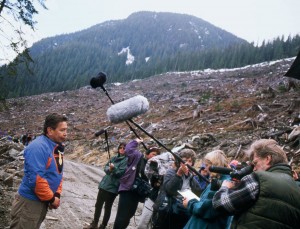 Should the B.C. publishing industry ever require validation—which it shouldn’t, price given the bang for the buck it renders in return for minimal subsidization—its foremost calling card is most certainly the hundreds of superb books produced for, doctor about and by the First Nations.

Bill 51: The Nisga’a Final Agreement Act would never have been passed into law without the collective work of B.C. publishers since the 1970s.

If further validation was needed, help environmental books would come a close second.

Two of the first titles that have successfully fronted campaigns to preserve B.C. wilderness include Thom Henley’s landmark coffee table book about Haida Gwaii, Islands at the Edge (1985), which generated formal conservation of South Moresby Island (Gwaiihaannaas), followed by Stein: The Way of the River (1988), leading to the creation of the Stein Valley Nlaka’pamus Heritage Park in 1995, now jointly managed by the Lyttton First Nation and BC Parks.

These were followed by Carmanah (1989), Nemiah (1992), Tatshensini River Wild (1993) and The Great Bear Rainforest (1997). Add lesser-known but integral books such as Paul George’s Meares Island (1985), Randy Stoltmann’s Hiking Guide to the Big Trees of Southwestern British Columbia (1987), Terry Glavin’s A Death Feast in Dimlahamid (1990) and Ron Hatch’s Clayoquot & Dissent (1994) and you have a dynamic arsenal on paper that has repeatedly won environmental victories for society at large.

Before that, Hon. Thomas Berger’s brave report as Commissioner of the Mackenzie Pipeline Inquiry, Northern Frontier, Northern Homeland (1977) was the major catalyst for changing attitudes to both the land and indigenous peoples in Canada. Given that fewer First Nations signed government treaties in British Columbia, this province has been at the forefront of legal battles to reclaim territories for both First Nations and the environmental movement.

Now along comes Picturing Transformation: Nexw-Ayantsut (Figure 1 $39.95), another paper trail to assert both the “environmental” and “First Nations” objectives.

Laden with large-format photos with minimal captions to emphasize “cross-cultural sharing,” this largely pictorial book appears, at first glance, to primarily attest to the validity of camping weekends at Nexw-Ayantsut—meaning place of transformation in the Squamish language—a ten-year educational initiative that kick-started a complex process that ultimately generated the preservation of a 50,000-hectare territory now known as Wild Spirit Places.

A conventional trade publisher might have insisted on a less puzzling title, something that would alert the reader to the fact that Picturing Transformation: Nexw-Ayantsut marks a landmark victory by Chief Bill Williams and the Squamish Nation—largely unheralded because it succeeded without violence, arrests or harsh confrontations.

Instead, credited to photographer Nancy Bleck, Chief Bill Williams and writer Katherine Dodds, Picturing Transformation: Nexw-Ayantsut is a glossy amalgam that promotes both cultural renaissance and environmental protection, somewhat obscuring the dynamism of a remarkable story. One has to read very carefully among the intermittent texts to piece together the gist of an inspiring victory of imagination over industry.

It all happened this way…

In 1989, photographer Nancy Bleck went hiking in the Carmannah Valley with a young, handsome, crusading conservationist named Randy Stoltmann who infused her with a newfound appreciation for B.C. wilderness.

After Stoltmann was killed by an avalanche in the Kitlope region of the Coast Mountains in 1994, Bleck decided to visit the wilderness area near Sims Creek, northwest of Squamish, that had been mapped by Stoltmann because he ardently believed it should be protected from logging.

There, in the Elaho Valley, Nancy Bleck met the remarkable West Coast mountaineer John Clarke in 1995, known for climbing in a white dress shirt. Clarke had accomplished more ‘first ascents’ in B.C. than anyone but never named a peak after himself. Clarke had led traverse in 1994 that resulted in Stoltmann’s accidental death. After their chance meeting in the old growth forest, Clarke and Bleck bonded in their deep affection for Stoltmann. The Western Canada Wildnerness Committee would soon start an initiative to have the region officially called the Randy Stoltmann Wilderness Area.

With encouragement from WCWC’s Joe Foy, another Stoltmann admirer, Bleck and Clarke formed a nameless initiative to take the public to see the headwaters of the Upper Lillooet, between Pemberton and Lillooet. In 1996, they shifted these small-scale expeditions to the Sims Creek area of the Elaho Valley, part of Tree Farm License 38, controlled by Interfor.

To do so, Clarke and Bleck posted notices about their camping trips in the Georgia Straight. These invitations to go traipsing through an area within the traditional territory of the Squamish First Nation caught the attention of Chief Bill Williams, one of sixteen hereditary chiefs.

On September 28, 1996—Randy Stoltmann’s birthday—Nancy stopped at Barney’s Petrocan station before heading off the main road for Sims Creek. There she borrowed the cell phone from a stranger to make a call. A few hours later, she met that same man on the sandbar at Sims Creek. He handed her his business card. It was Chief Bill Williams.

Nancy Bleck mollified the chief for their trespassing without his consent by giving him an eagle feather that she had been given to complete a vision quest. John Clarke invited Williams to accompany him on one of his climbing treks. That’s when the white girl, the white-haired man and the chief decided they could possibly work together to pursue similar objectives.

This triad would soon be cemented by John Clarke taking Chief Bill Williams on a five-day hike across the glaciers from Princess Louisa Inlet, from 7,200 feet above sea level, down to sandbar at Sims Creek.

With the crucial support of the new arts programmer of the Roundhouse Community Centre in Vancouver, Amir Alibhai, Nancy Bleck transformed John Clarke’s original idea into the Witness Project, a six-month plan to both showcase traditional Squamish culture and/or taking city folks on camping trips to that sandbar on Sims Creek.

The fundamental goal was not political or cultural. It was educational and environmental. As John Clarke put it, “For a million years or more, we humans lived outside, under the sun and stars, our lives guided by the seasons, the weather and the tides. For all this time we were a community of plants and animals, where day-to-day living, landscape and spirituality were intertwined. The Witness camping weekends reconnect us, however briefly, with the world. When we drink from the cold mountain streams, or sit around the fire at night, we are coming home to that place from which we evolved.” “When we drink from the cold mountain streams, or sit around the fire at night, we are coming home to that place from which we evolved.” – John Clarke

The first Witness expedition left Vancouver at 8 a.m. to travel to Sims Creek in July of 1997.

But there was a problem. Loggers for Interfor got wind of the incoming incursion to what they considered their logging territory and planned a blockade at Mile 21. The sandbar was at Mile 53 of the G Main logging road. So Williams organized reinforcements from the “Squamish Nation Peacekeepers” to escort the Witness program neophytes to Sims Creek.

And so it began.

During that inaugural Witness Project weekend, participants received photocopies of the Squamish Nation’s Assertion of Aboriginal Title and Chief Bill declared his people’s desire to reclaim the Sims Creek area as a formal possession. Meanwhile Interfor proceeded to log the area above Sims Creek in 1997, in keeping with license.

As the weekend camping trips continued, Williams began to sense how these newcomers could possibly help him assert the title to Squamish territory.

“We would like to explain the culture of the Squamish people to anybody in the world,” he said, ‘to have them walk away and use some terms of Squamish, whether it be Huy chexw a or Utsám, but they learn at least one world, and they recognize that there is a language, there is a culture and there is a group of people that are attached to the land. The land was never barren, the land was never set free, the land was never unclaimed.”

That same year, at the closing of a Roundhouse Witness Art Exhibit, climber John Clarke was formally accorded the Squamish name Xwuxwsél’kn (Mountain Goat) partly because of his white hair, white shirts and longjohns. (When he died of cancer in 2003, his funeral was held at the Squamish Nation Community Centre, the first time a non-First Nations person was so honoured.)

Nancy Bleck was accorded the name Woman Eagle in 2001. That year tensions escalated because Interfor was planning to log an area called “cut-block 72-4” in the spring of 2002. The triad of Nancy Bleck, John Clark and Chief Bill Williams met with Interfor VP and management executive Rick Slaco and one of his five managers who were named Dave on the 26th floor of the Bentall towers in Vancouver to discuss forthcoming Witness weekends.

The turning point in the meeting came when Williams took umbrage with the way one of the Daves was interrogating him about what he was up to on land that Williams considered was his own territory.

On April 28, 2001, at the Sims Creek sandbar, Chief Williams countered by declaring Sims Creek to be a sacred place, dating back ten thousand years in Squamish history. He subsequently invited everyone who had attended a Witness weekend to return to Sims Creek for a media event that attracted 400 people.

“Interfor, you have awoken a bear!”

“Interfor, you have awoken a bear!” declared Byron Joseph of the Squamish Nation.

According to the one-sided view of Picturing Transformation, Chief Bill Williams outfoxed Interfor’s Rick Slaco by inviting him to attend the “verification ceremony.” When Slaco respectfully showed up, he was shown on national television thanking Williams for including him.

“He [Slaco] became a public witness to the fact that the Squamish Nation and all the Witness participants had demonstrated that people did, in fact, care about the trees of cut-block 72-4… Not long after that verification ceremony, logging in the area was stayed. The Squamish Nation set a new precedent that had so much power, Interfor had no authority to stop it.”

So, by coincidence, or by spiritual design, Bleck and Clarke had led their weekend camping expeditions to same ground that was considered by the Squamish elders to be “the place where the man transforms from a human to an animal spirit.”

The Squamish Nation posted their new Sacred Land Use Plan on their website in 2001, pre-empting the Province of British Columbia’s Land Use Plan for the area. Ultimately, in 2005, Chief Williams signed an agreement with the Province to establish Wild Spirit Places for the next five hundred years, preserving much of the last un-roaded, non-industrial valleys in the territory, as well as Nexw-Ayantsut. Chief Williams (above) went to Squamish elder Lawrence Baker who told him the traditional name for the Sims Creek area was Nexw-Ayantsut (Nook-EYE-en-tsote).

The Witness Project won the Best Cultural Event Award from Tourism Canada in 2002. It was terminated in 2007.

Picturing Transformation: Nexw-Ayantsut is in keeping with Alex Rose’s Celebratory Spirit Dance at Meziadin (2001) that marked the triumph of Chief Joe Gosnell and the Nisga’a in the courts. It comes after the battle has been won, with the knowledge that a subtle war of words must continue. Like numerous coffee table books that it emulates, it is an ambassadorial work of propaganda that proves the power of imagination and community can overcome major industrial and political forces. Or, in the words of Paul George, longtime director of the Western Canada Wilderness Committee, “The power or books and artists together is a magic combination.”

The B.C. literary and publishing community continues to provide proof of that statement. Our province would be a very different society without books like The Great Bear Rainforest, Stein: The Way of the River, Island at the Edge.