With $150 of her own money, Welsh-born Maisie Hurley started The Native Voice as a catalyst for change. 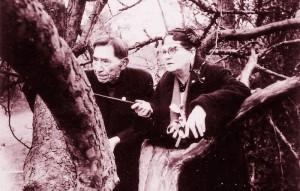 She also served as a volunteer advocate for First Nations clients in court even though she did not have a law degree.

Eric Jamieson’s much-needed The Native Voice: The Story of How Maisie Hurley and Canada’s First Aboriginal Newspaper Changed a Nation (Caitlin $24.95), recounts how Haida elder Alfred Adams, price the founding president of the Native Brotherhood of British Columbia (NBBC), implored Welsh-born Maisie Hurley to carry on his work when he was dying of cancer in 1945. Hurley continued to serve as the unpaid publisher for The Native Voice after it became the official newspaper of the NBBC. The Native Voice was integral to the post-war fight for the right of First Nations people to vote provincially (in 1949) and federally (in 1960). For her dedication to improve the lives of “my people,” Hurley was honoured through naming ceremonies in the Skeena, Squamish/North Vancouver and Comox areas.

Most importantly, First Nations leaders used The Native Voice as a platform for justice.

“It was a paper intended to be written for First Nations by First Nations,” says Eric Jamieson, “and so the vast majority of the writers, besides Maisie, who wrote an amazing amount of copy, were First Nations.”

All leaders of the NBBC wrote for The Native Voice at various times. These included the Reverend Dr. Peter Kelly (probably the most prolific writer), from Masset, who was the Legislative Chair of the Native Brotherhood of B.C.” There was also Andrew Paull, from Squamish, who called himself a “lawyer without a ticket,” because he was not able to practice law in the traditional sense. He went on to have a noteworthy career defending First Nations causes and according to Maisie, “could quote cases chapter and verse.”

Other significant contributors were:

Alfred Scow (son of William), a business agent for the NBBC who became a provincial court judge.

Harold Sinclair, from Skeena, a vice president of NBBC and an expert on fishing issues.

Guy Williams was probably the closest to Maisie of all the NBBC presidents.

Constance Cox, from Hazelton, who was Maisie’s interpreter whenever she travelled north.

Senator James Gladstone, the first First Nations individual to be appointed to the Senate

Frank Howard, NDP MP for Skeena who constantly launched private members bills to grant First Nations the federal franchise, to remove barriers to alcohol, and to amend the Indian Act.

NDP MLA for Atlin, Frank Calder, was the first status Indian to be elected to any legislature in Canada.

Maisie also introduced a young Six Nations man to her readers by the name of Jay Silverheels who played Tonto on the popular television series, The Lone Ranger.

B.C. authors who wrote for The Native Voice included Hubert Evans whose story in The Native Voice in the June and July 1948 issues was the basis for Evans’ important novel, Mist on the River (1954), about First Nations on the Skeena River. His great novel was written after he became friends with Guy Williams who urged Evans and his Quaker wife to come north as teachers. Paul St. Pierre (second from left) at the Williams Lake Stampede, when he was a Liberal MP, with Prime Minister Pierre Trudeau and MP Ron Basford, Aug. 10, 1970.

Prince Ruper alderman Dr. R. G. Large, author of Skeena, River of Destiny, and Rich Hobson, who wrote the Cariboo classics Grass Beyond the Mountains, Nothing Too Good for a Cowboy and The Rancher Takes a Wife. contributed the The Native Voice.

When St. Pierre worked for the Vancouver News Herald, he and Maisie dreamed up a spoof that had Chief William Scow become premier and take over B.C. “from the whites.”

Will Rogers, the American humorist, who was part Cherokee, once wrote to Maisie in response to her sending him a couple of issues of The Native Voice. He said; “It is by long odds the largest Indian publication I have seen. We have nothing as good in the country.”

Buffy Sainte-Marie, who wrote the anti-war anthem Universal Soldier, wrote an article in The Native Voice in 1964 titled, “A Fresh Look at ‘Reality.” It was written in response to a 1963 Native Voice article by Alvin S. Kelsey in which he stated; “The problem of the Indian is that he doesn’t face reality.” Buffy Sainte-Marie responded: “I have heard this tricky two-edged phrase countless times. Now I want to tell you what I think about facing reality and being an Indian.”

She went on to write; “In the first place, I do not believe there is such a thing as “the Indian.” She wrote that she knew Crees, Apaches, Tsimshian etc. etc. etc. but the individuals who “make up these tribes are as different from one another as salt is from sugar.”

When Eric Jamieson recently contacted her, Sainte-Marie advised that although she didn’t know Maisie well, “…The Native Voice was one of the few magazines of excellence around at the time who (sic) focussed on Native American people and issues.”

In terms of the evolution of political and civil rights for First Nations in B.C.,  it was The Native Voice that got the ball rolling in the modern era.

Eric Jamieson’s story of the collapse of the Ironworker’s Memorial bridge in Vancouver, Tragedy At Second Narrows (Harbour), won the Lieutenant Governor’s Medal for History in 2009.

3 Responses to “The Native Voice is heard again”