The importance of being silly 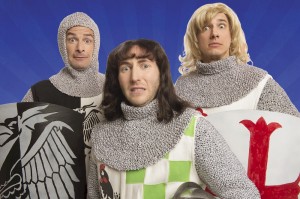 There is such an abundance of pleasure to be had from Eric Idle’s tonic of silliness, buy Spamalot, that even someone not already a fan of Monty Python in general, or an aficionado of the 1975 film Monty Python and the Holy Grail in particular, is guaranteed to leave the theatre happy.

Who cannot love a musical with lyrics such as “He is Lancelot. He goes to France a lot?”

Yes, you do get snippets from the Holy Grail movie: The clicking of coconuts to simulate horses’ hoofs. An “I’m not dead yet!” sequence when bodies are collected during the plague. That oddly funny bit where the guy gets his arms and legs chopped off but he vigorously intends to keep fighting. And, of course, we must hear rousing renditions of one of Idle’s more memorable musical numbers, “Always Look On The Bright Side of Life.”

That said, much of the thrill of seeing and hearing Spamalot arises from the extent to which Idle has created original material. One has to listen carefully for the witticisms in the text while simultaneously being prepared for guffaws. After a corpse has been dismembered, body parts merchants roam the streets crying, “Bring out your arms” (rather than alms). And there are several noteworthy musical numbers that are as clever as they are comic.

When King Arthur, portrayed humourlessly by David Marr, bemoans his fate with a crooned soliloquy, “I’m All Alone,” his long-suffering and ever-faithful servant and coconut-clunking steed, Patsy, played with faultless precision by Andrew Cownden, delights the audience with his facial expressions of astonishment as the insensitive monarch renders Patsy invisible.

No, it wasn’t Eric Idle who wrote perhaps the most famous Monty Python lyric, “The Lumberjack Song,” but his outstanding show tune in Spamalot, “The Song That Goes Like This,” ranks as the highlight of the first act, even if Terra C. Macleod as The Lady of the Lake and Guinevere had an off-night with her singing.

Josh Epstein as Sir Robin, Jay Hindle as Lancelot and Jonathan Winsby as Galahad are all glaringly brilliant throughout, as various knights of the round table and as various supporting characters.

Unlike some others with the jitters, Winsby looks like he’s enjoying himself from the outset, and his strong singing lifts this production towards the level of musical, beyond spoof. Epstein’s rendition of “You Won’t Succeed On Broadway” (unless you have Jews) is worth the price of admission and his cheekiness as the “French Taunter” atop a castle, heaping disdain at King Arthur, is both charming and hilarious. Eric Idle’s skewering of the French as they skewer the English, well, pure Monty Python.

We are cued to delight from the get-go when an historian’s mock-BBC-ish introduction about the history of England is misinterpreted and the Nordic-clad cast provides a rollicking Fisch Schlapping Dance from Finland, having misheard Finland for the word England. This opening number is so dumb, so gratuitous, that it serves notice to the audience that no amount of energy will be spared for the next two hours on the sublime importance of being silly.

Capably directed by Dean Paul Gibson and choreographed by Lisa Stevens, this energetic Arts Club presentation benefits from a preceding Citadel production in Edmonton, as well as countless previous incarnations of Idle’s foolishness since the original 2005 Broadway premiere of Spamalot was directed by Mike Nichols, winning three Tony Awards and 14 Tony nominations. It’s not possible to gauge the degree of originality beyond the zest of the performances.

This show will play to packed audiences for two months, deservedly so. And it will get even better. A few technical problems on opening night will be solved; Marr and MacLeod can be persuaded to make it look like they are enjoying themselves; and the difficulties of reconciling the volume levels of the cast with the orchestra will certainly disappear.

Some people will go more than once. It’s basically adorable.