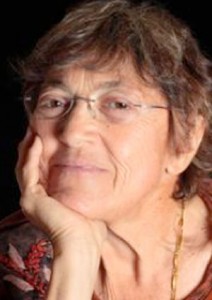 Doctor, social activist and feminist, Ruth Simkin first revealed her challenging life journey in The Jagged Years of Ruthie J., a memoir that recounts her successful struggle to overcome misunderstood epilepsy. It has been followed by a diverse collection of stories–some fictional–that contains more poignant and humourous accounts of Simkin’s work as a physician, What Makes You Happy (Ekstasis 2015).

Described as “laugh-out-loud funny in some places and raw or tender in others,” What Makes You Happy ranges from the big subjects of God, death and cruelty to the miniscule but formative experiences of a child having backyard conversations with animals or being chastised by a religious Jew who passes by the fence and objects to five-year-old Ruth whistling on the Sabbath. It is a deeply humanist affirmation of life from a Jewish-raised doctor, born in Winnipeg, who became a specialist in palliative care. Having lived and studied in Canada, the U.S., Israel, China, England and Russia, Simkin has also published many medical articles on women’s health. Ruth Simkin’s first book, Like an Orange on a Seder Plate, has been described as a feminist, Passover Haggadah.

In the early 1990s, Ruth Simkin moved to Salt Spring Island where she became a farmer of “yuppie veggies” for almost ten years before returning to medicine as the first fellow to study palliative care at The University of British Columbia Medical School. After her three-year fellowship she became board-certified by the American Board of Hospice and Palliative Medicine, becoming a specialist in pain and symptom management of dying people. For five years, she worked at the Victoria Hospice during which time she left Salt Spring Island and moved to Victoria, where she now resides.

Simkin has remained active with a pet therapy program ( PATS) and served on the Board of Directors of Out of the Box Production Company for four years. She has also been active in volunteer work for the Greater Victoria Coalition to End Homelessness, taiko drumming and the production of the Vancouver Island Jewish Community Directory for Congregation Emanu-El.

2 Responses to “Simkin’s journey of compassion”