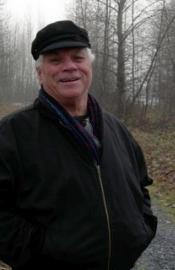 Anvil Press, in collaboration with Pandora’s Collective, is launching a posthumous book by Jamie Reid, A Temporary Stranger, on Thursday, May 25th, 7:00 p.m. at The Cottage Bistro, 4468 Main St (at 29th) in Vancouver with the company of friends, not strangers.

Many of Reid’s literary colleagues will be on hand to read selections from A Temporary Stranger, Reid’s volume of poetry and other writings comprised of three sections: Homages, Fake Poems, and Recollections.

In Homages there are poems of reverence and honour, tributes to writers who had opened up the world of poetry to Jamie. There are poems to Spicer, Baudelaire, Rimbaud, Breton, Francis Ponge, Tristan Tzara, and others.

At the centre of A Temporary Stranger are the Fake Poems, so called because “There is no art on earth that can fully represent the exact and flowing experience of viewing stone within the flow of water and the waving light within the water and around the stone, and the subsequent sense of awe and beauty that arises in the interaction between the seer and the seen… . In that sense, all art is fake… ”

The third section, Recollections, is an assemblage of articles – paeans, really – to Robin Blaser, bill bissett, Warren Tallman, John Newlove, Curt Lang, Nellie McClung, Artie Gold, Kim Goldberg, Kate Braid, and others. Here, as friend and editor Karl Siegler states in his Foreword, “we encounter memory-not as a form of nostalgia for a bygone golden age of a romanticised pastoral arcadia … but as an historical record of who did what when, and to what end, throughout the counterculture revolution that shaped the lives of Jamie Reid and his companions over the past six decades.”

Jamie Reid died at home on June 25, 2015. According to his wife, Carol, “his last day was filled with happiness and healing energy, and he was vibrant.” A memorial gathering of appreciation was held at the Wise Hall, Vancouver, August 9, 2015.

Jamie Reid was born in Timmins, Ontario in 1941. His parents were from Canmore, Alberta, but his mother had lived on Vancouver Island. Having taken a job as a mining engineer for a Timmins gold mine after his marriage, Reid’s father soon enlisted in the Canadian army as an engineer.

While Reid’s father was at war in Britain and Italy, his mother took him to live in Banff, Alberta. “My father was never the same after the war,” Jamie Reid recalls. “He suffered several mental breakdowns. He lived with us briefly in 1946, long enough to see the birth of my brother, Robert, who died when he was 21-years-old.”

Two other siblings died as young children: Jamie Reid’s brother Douglas died while his father was training in Chilliwack and his sister Janet died in Banff while his father was overseas. “My father lived with us again for about a year in 1952,” he recalls, but then he and my mother separated permanently.”

A registered nurse, Jamie Reid’s mother became Night Supervisor at the University Hospital in Edmonton after the Reid family moved there in 1948. She subsequently became matron of the Aberhart Sanitorium for tuberculosis patients. “It was always her dream to live on the West Coast,” he recalls, “so we moved to Vancouver in 1953. “She became Night Supervisor at Shaughnessy Hospital but later, because of the pressures of working nights and raising two children, she gave up her supervisory position for a position as a regular nurse on the Shaughnessy psychiatric ward.” She was head nurse of that ward when she retired in 1976.

Influenced by three teachers at King Edward High School (Ida Abel, Mary Fallis and Mr. Fitzpatrick), Reid began to read Jack Kerouac and Allen Ginsberg, leading him to the works of Rimbaud, Baudelaire, William Carlos Williams, Ezra Pound, Irving Layton and Raymond Souster. “I also became interested in modern jazz,” he recalls. “I still remember the day in 1959 when I went to the record store and played the Miles Davis album ‘Milestones’ in one of the booths that record stores used to have in those days: that was the sound that I had been waiting to hear all my life.”

UBC professors Jake Zilber and Tony Friedsen encouraged Reid during an undergraduate writers’ workshop. “I first met George Bowering at one of the meetings at Tony Friedsen’s house,” he recalls. “He was the first live poet that I had ever met. I mean, some people that I knew had written poetry, but George was the first person that openly said he wanted to be a poet as his life’s activity. And so I decided to be a poet, too.”

Jamie Reid formative experiences with TISH at UBC led him to be influenced by local writers such as Bowering, Frank Davey, Fred Wah, Gladys Hindmarch and Lionel Kearns. In turn, he came to know and respect other Vancouver poets that included John Newlove, Gerry Gilbert, bill bissett, Peter Trower, Barry McKinnon, Maxine Gadd, Judith Copithorne and many others.

Poets who came to Vancouver and influenced him have included Robert Duncan, Robert Creeley, Jack Spicer, Al Purdy, Milton Acorn and Louis Dudek. “All of these poets gave something to me,” he says, “showed me something about life and about poetry.”

Jamie Reid became a member of the original five-member editorial board of TISH, the Vancouver poetry newsletter at UBC, in 1961. He later became a co-organizer (with many others), and a spokesperson for, the first Vancouver Human Be-In in Stanley Park, in 1967. That year he also visited to the Okanagan Valley and produced poems that appeared in his first book in 1968.

Reid became thereafter, in his own words, “a fierce communist for almost twenty years,” mainly in central Canada. Until 1987, Reid renounced and left behind the somewhat insular concerns of former literary pals who turned from radicalism to university teaching jobs.

Jamie Reid returned to West Coast with an open mind in 1987, producing a hasty but keen appreciation of the Diana Krall’s music career in 2002. This was followed by a cumulative work of poetry, I. Another. The Space Between: Selected Poems that incorporates early work and reflects upon his period of disengagement from the literary scene. He also published a chapbook, Homages (Pooka Press).

I. Another. The Space Between: Selected Poems. Talonbooks, 2004

The Man Whose Path Was On Fire. Talonbooks, 1968 (poetry)