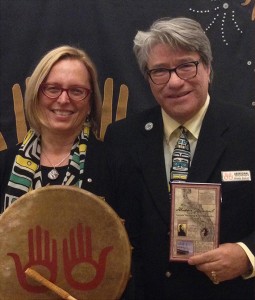 Mary Tasi of Sky Spirit Studio and her studio partner Wade Baker, treat a descendant of three royal First Nations lineages, have co-written The Hidden Journals: Captain Vancouver and his Mapmaker (Sky Spirit $20) in an attempt to prove there was a marriage between the mapmaker on HMS Discovery, Lt. Joseph Baker—namesake for Mt. Baker—and the daughter of Musqueam Chief Qeyupulenuxw in 1792—and also to substantiate Wade Baker’s claim to be a descendant of Lt. Baker. The pair visited archives in B.C. and Maui to examine maps which they claim were purposefully hidden. They also reference logbooks, drawings and oral stories. Much credence is given to the contemporary memories of First Nations and Hawaiian elders. While the evidence for Baker’s family background is far from definitive, their book does constructively provide an alternate viewpoint as to why Captain Vancouver was discredited by the Lords of the Admiralty after he returned to England in 1795. With the sponsorship of Neptune Bulk Terminals and Port Metro Vancouver, the authors arranged to have one thousand copies of their book donated to North Shore high schools. 9780993843815