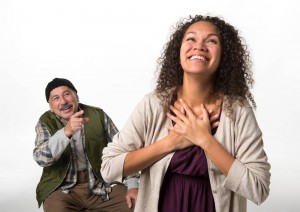 It must have been a electrifying moment on opening night in Johannesburg in 1995 when South Africa’s leading playwright directed and starred in Valley Song, this web soon after South Africa had held its first free election, and his lead actress, playing his grand-daughter in the play—Veronica, a spirited young woman who wants to leave the farm and go to Johannesburg to be a singer—adamantly declares, “You will never see me on my knees scrubbing a white man’s floor!”

Like Nora slamming the door in Ibsen’s A Doll’s House, Veronica will not be deterred by fear of failure. She is emboldened by an entirely new of thinking. This perplexes, annoys and even frightens her widowed grandfather who has devoted his life to raising and protecting her. He is still horrified that his own daughter has disappeared, disgracefully leaving him to raise Veronica alone. He wants to grow pumpkins; Veronica wants to grow dreams.

Given that most of the population of South Africa was inspired by Nelson Mandela and expecting change, Athol Fugard, a long-time anti-apartheid activist, consequently wrote a play about an old coloured man, Abraam, who, after 46 years of apartheid, wants to cling to his agrarian roots and maintain the comfort of old standards, putting him at odds with his beloved Veronica, who raises money for her getaway by going door-to-door, singing her own original melodies—essentially busking.

Valley Song has had some good press. The white liberal response was biased in favour of the play in the 1990s. Given that February is Black History Month, one can appreciate an opportunity to revisit some theatre history for ninety uninterrupted minutes of dialogue. But the moment when Sereana Malani delivers her declaration of independence was not electrifying.

It’s not just because Valley Song has no sex, no violence, no humour, minimal plot, a lack of stage business and one wall of looming clapboard as a set. And it’s not just because Malani and David Adams (who plays Abraam, as well as the author/narrator) have yet to discovery their chemistry. In Canada, in Richmond, in 2015, we are so far removed from the necessity of Fugard’s play that it’s like we’re witnessing a 20th century museum piece in the 21st century.

Unless the performances are razor sharp, no amount of cogent program notes are going to prevent most of the patrons from going home and wondering if their evening might have been better spent with Game of Thrones.

In order for Valley Song to work with only two actors, both have to afford riveting performances throughout. The preview for this play was cancelled because one of the actors was ill. Professional actors, unlike professional athletes, don’t get to go on the injured reserve list, so this show went on. And on. And on. It’s unfair to pass judgment on this production as a result. You wouldn’t judge Sidney Crosby harshly if he skated with a broken leg; so we should be able to cut some slack for ill actors.

The role of Veronica requires someone who can warble like Whitney Houston. We have to believe that she is not deluded in her hopes of making it to Johannesburg in order to find a singing career. We know from previous work that Sereanna Malani is a talented actor who can be a galvanizing presence, but on opening night her efforts to improvise melodies for Veronica’s lyrics fell short of mesmerizing—due to the aforementioned extenuating circumstances.

Possibly this also explains why David Adams’ main character lacked an edge on opening night. We were never convinced he was tormented or heartbroken. There was no Lear-like brooding for his Abraam. His is a soft, good presence. He makes the play “nice” when it needs to be disturbing. But Fugard’s text is so doggedly didactic—explaining the action as he goes—that one hesitates to fault any actor for failing to ignite this script.

Valley Song is a venerable piece of theatrical history for political reasons, not artistic ones. Later in the run, it could very well sprout wings and fly; opening night was more like watching Wilbur take off for three seconds at Kitty Hawk in 1903 after Orville lost the coin toss.

Valley Song could still soar if the petrol of musicality is added and an old man’s angst is sharpened and trumpeted.