Philip Marlowe has left the building 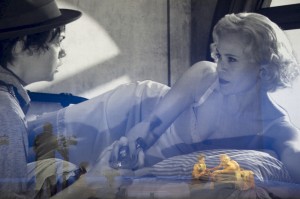 Stan Douglas and Chris Haddock’s one trick pony Helen Lawrence: Vancouver Confidential at the Arts Club’s Stanley Theatre has all the emotional impact of a Power Point presentation.

For ninety minutes we endure twelve fine actors being relegated to mere shadows of their flesh ‘n’ blood selves as they perform, sick and videograph one another, behind larger-than-life, simultaneous, projected images of their acting on a forefront scrim. If that sentence doesn’t make sense to you, well, good.

Douglas—who has cast himself as Director as well as the 3D Production Designer after original director Kim Collier withdrew from the enterprise—justifies this duality as “a work of visual polyphony.”

Such artspeak might successfully intimidate arts bureaucrats who want to appear hip, but it reveals shallowness to anyone who is willing to admit hooey is hooey.

“In 1948,” Douglas further states, “the world economy was in recession, the banking system in shambles, people were terrorized by a deepening Cold War, and there was a housing crisis in virtually every city of Europe and North America. This is the context of Helen Lawrence.”

Sounds good, right? But these pretensions of “context” do not reverberate in memorable action or scenes in which we invest our own feelings in terms of what might happen next. Given that film is the most popular art medium these days, plenty of gullible folks are now going to trundle off to the see Helen Lawrence and congratulate themselves for seeing something they can later describe to others as ‘different.’ But that’s as deep as it goes. Chris Haddock is a terrific writer, no question, but he has tossed together a mélange of storylines that have zero emotional weight. The longer it goes, the more it appears that Douglas and Haddock have incorporated stylized, panoramic filmic backgrounds in the name of… in the name of…. well, because it seemed like a cool thing to try. When one of the characters is accidentally shot to death by a drunken policeman upset because his favourite prostitute has taken the night off… well, it’s about as riveting as a parking ticket.

We simply don’t care about the characters. They are pawns for a larger conceit in which technology crushes art. We see this happening all the time in movie theatres these days so perhaps it’s inevitable the scourge of rampant technology—not art for art’s sake, but technology for technology’s sake—would infiltrate the theatre, that sadly retro space where people are mostly speaking words.

The hodge-podge that is Helen Lawrence is meant to evoke the underworld of post-war Vancouver but beyond the barrage of projected 3-D imagery, what is original here? We already know about Hogan’s Alley. We get to hear about it every February. And, yes, we know there was a notoriously crooked police chief in Vancouver named Mulligan who ruled the city with an iron fist, renamed Muldoon in this faux film noir pastiche. (Betty O’Keefe and Ian Macdonald wrote a book about his era called The Mulligan Affair: Top Cop on the Take in 1997.)

It is possible to suggest Helen Lawrence could be derivative of a very little-known Raymond Chandler screenplay, one that was never made into a movie, one that was set almost entirely in Vancouver. Chandler’s late-‘40s screenplay called Playback opens with a beautiful blonde dame, Betty Mayfield, crossing the border from Seattle to Vancouver, having narrowly escaped being imprisoned for a murder she did not commit. Helen Lawrence opens along similar lines…Chandler started writing his Vancouver underworld script in 1947; Helen Lawrence is set in Vancouver in 1948. Chandler had a great deal of trouble trying to transcribe his Vancouver story into a novel because it lacked a cryptic, first person narrator, such as his famous private investigator, Philip Marlowe. Helen Lawrence also has a lot of trouble maintaining our attention because there is no main character. Lisa Ryder in the title role of blonde Helen has been directed to be uniformly harsh, oddly sexless, with few lines and no allure. She is almost a minor character. It’s as if the creators of this conceit don’t want any of the people on stage to upstage their ground-breaking agenda.

Haley McGee has some strong moments as a young, lesbian hotel worker with a crush on Helen; as does Tom McBeath as the aforementioned Sergeant Perkins. Hrothgar Mathews as Harry and Crystal Balint as Mary are also admirable. In fact, the acting is so good overall that one wishes this production could be seen without the façade of avant-gardism that cloaks the enterprise. That way we could see whether or not Haddock, a tv genius, has the smarts to write a play that does more than get headlines before it is produced.

It is a waste of time if you value the intimacy of theatre.

One Response to “Philip Marlowe has left the building”