Of horses and grasshoppers 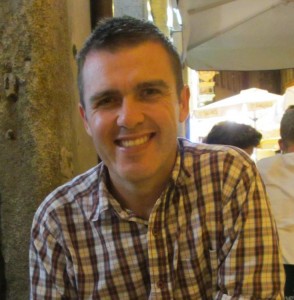 John Thistle’s study of managing (and mismanaging) B.C.’s grasslands, buy Resettling the Range: Animals, Ecologies, and Human Communities in Early British Columbia (UBC Press $95), has won the 4th annual Basil Stuart-Stubbs Award for Outstanding Scholarly Book on B.C. that was presented at UBC Library on June 9, 2016. It was also shortlisted for a Roderick Haig-Brown regional prize. The book details the battle that BC ranchers waged to rid the grasslands of both wild horses and grasshoppers during the late 19th and early 20th century. With the help of government, ranchers worked to eradicate the competition under claims of “ranch improvement and rational land use” uncovering more complicated stories of dispossession and marginalization. 9780774828376

Thank you. I’d like to begin by saying what an honour it is to receive the Basil Stuart-Stubbs Award for Outstanding Scholarly Book on British Columbia, and say thank-you to Brenda, Ingrid, and UBC Library, Alan Twigg and BC BookWorld, the selection jury for this year, and everyone else who had a hand in creating this important award. It’s a tremendous honour, this award, and I’m really very grateful to receive it. I’d also like to thank Becky and Clare for all the wonderful work they did this week and last promoting the Basil Stuart Stubbs award on social media and elsewhere.

I’d also thank everyone one who supported and encouraged this book along the way: first and foremost my wife, Raquel Larson. Raquel supported a book about horses, grasshoppers and the resettlement of British Columbia from the start, in every way possible. To repeat what I’ve said many times before, because it’s true, my name is on the cover but this is her achievement, too.

I’d also like to thank everyone at UBC Press, especially Graeme Wynn and Randy Schmidt, and publications board for supporting this book when no doubt there were other options on the table. I’m also very grateful to Ann Macklem who copy edited this book, and who probably pushed the hardest to get it over the finish line when it was close.

Geographer Cole Harris’ influence is all over this book; as is Graeme Wynn’s. I will always be grateful to Cole and Graeme for introducing me to British Columbia and for encouraging me to think long and hard about its historical geography. I’d also like to acknowledge the support of my parents who flew from Newfoundland to be here today and say thanks to them for their support while I was finishing this book at Memorial University.

The truth is that it’s probably impossible to thank everyone who had a hand in helping this book to publication.

No writer suffers writer’s block when it comes to thanking people. Rather the real worry is forgetting someone, and I’m sure I have. The point is that the list is long and I think this tells us something important about writing and publishing books: that really it’s a collaborative effort. I can’t tell you how happy and grateful I am to receive the Basil Stuart Stubbs Book Prize, but the deeper significance of this award for me rests in the work that other people did to make this book possible. This award, I think, is their achievement too.

So why did I write this book about horses and grasshoppers? That was one of the questions that Becky Potvin from UBC asked me a couple of weeks ago when we were doing an interview for this award. The short answer I gave then was that I wanted to write a book about a landscape I loved – the grasslands; that like other environmental historians I wanted to write about the past of this place in ways that were not confined to humanity alone; and that all of this made a book about horses and grasshoppers inherently attractive to me.

But actually I think I sort of stumbled into it. I think archival research is often like that. Granted, I knew I was interested the grasslands. I wanted to know how the grasslands had changed ecologically over time and what this meant for people and nature. What surprised me in the archives – what in a sense I stumbled into in – were the stories of horses and grasshoppers. The original plan for this book was to write an ecological history of ranching, a book that not only documented actual changes in the land associated with the arrival of cattle, primarily after 1858, but that also sought to understand how people understood and responded to these changes when deemed undesirable, if they did.

But the result was not exactly what I set out to do. The book is still a lot about ecological history in the grassland. It’s also still a lot about ranches. But rather than focus ranches and cattle, it revolves instead around wild horses and grasshoppers. The reason for this was straightforward: the deeper I dug into the archives on these animals the more it seemed they had something interesting to say about environmental history: about how the grassland had changed over time.  What horses and hoppers had in common was that both were herbivores. Settlers tried to eliminate these animals because they competed with cattle for grassland. Looking carefully these animals exposed how much the grassland changed when settlers and their animals arrived.

It also revealed some essential elements of what Cole Harris called the Resettlement of British Columbia – the transfer of land and resources from indigenous people to settlers. For one thing it turned out that what settlers referred to as ‘wild horses’ were not wild at all, at least not in the usual sense of bears, cougars and coyotes. Some probably descended from indigenous horses that went feral during the disease epidemics of the 18th and early 19th century, others reportedly were lost or abandoned pack animals; and some were feral escapes from settler stock farms.

But most wild horses, I think, were “ecological refugees” from an Indian Reserve system that left indigenous people in the grassland with not even close to enough land and water. Lacking these resources they had little choice but to graze horses on the “open range.” This put horses in harms way when the bounty hunting and roundups began. Indigenous peoples not only claimed wild horses in many cases, but also defended them. In some cases they participated in roundups making the story of wild horses more complicated. Ironically, perhaps, the story of wild horses helped me to think about the socio-ecological consequences of colonialism.

The story of grasshoppers was different – mainly because unlike horses no one claimed or tried to protect them. Yet the reason for trying to get control them was exactly the same: that they competed with cattle for grassland at time when grass was becoming scarce. But getting rid of them was difficult. Partly this was for social reasons, but this too revealed something interesting resettlement. Some ranches in the grassland were (and are) enormous, but most were not, and some were actually pretty marginal operations. So when it scientists in the 1920s and 1930s blamed overgrazing for the grasshopper problem, small ranchers blamed the big ones for ruining the range. Some indigenous peoples in the Nicola Valley in the 1920s also refused to put arsenic on reserves and stopped others from doing so, when reportedly some of their kids became sick.

Another reason grasshoppers were relatively hard to eradicate was that insects are just more resilient, and thus harder to kill, than horses. They’re also far more numerous. But interestingly, and this gets back to my basic interest in ecological history, it was also because resettlement of the range by ranchers had remade the grasslands ecologically in the ways that apparently favoured insects outbreaks. Environmental history is often a lot about irony and this is a good example because it seemed the more the range was remade and degraded, the better it was grasshoppers. Resettlement encouraged animals that settlers now needed to control.

What’s interesting, I think, about all this from a writing perspective is that none of it was anticipated, or could have been, when this book began. Probably like most books it started out one way but ended another, and this for me for me is what historical scholarship is a lot about. I hesitate (somewhat anyway) to borrow from Forest Gump, but I guess it’s true that when you open a box of archival records, you never know what you’re going to get – and this to me is a VERY good thing.

HERE IS A  REVIEW OF THE BOOK BY MARK FORSYTHE

Wild horses competed with cattle herds by dining on grasslands. They were getting in the way of burgeoning enterprise. However, wild horses weren’t the only culprits. John Thistle details such issues as poor grazing practices, severe weather conditions, a reluctance to rehabilitate lands and the loss of fire control, the latter once used by natives to encourage grass renewal and restrict invasive brush and trees.

Killing wild horses was a quick fix solution and a recipe for conflict between ranchers, government officials and First Nations people. As defined, wild horses did not have brands. Many of these animals belonged to indigenous peoples, and because reserve lands had limited feed and water supplies, horses often grazed on what were now considered “crown lands”.

State sponsored roundups and bounty hunting ensued. Many thousands of horses were killed, used for meat, dog food or fertilizer. Tensions mounted, with threats of war between ranchers and aboriginal people on the grasslands.