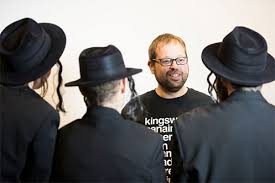 About four or five years ago, dosage the sought-after lighting designer Itai Erdal surprised his colleagues with a one-man, documentary-style tribute to his mother, How To Disappear Completely. This charming and unaffected amalgam of stand-up narration, still photos and home movies premiered at the Jewish Community Centre and has been performed by Erdal in nineteen cities.

Now he’s back—and the good news is he has not bitten off more than he can chew. A Very Narrow Bridge is a more modest presentation than his mini-biography of his mum. Even though the narration this time has been augmented by three fine actors (Patti Allan, Anton Lipovetsky, Tom Pickett) who comically portray an Israeli divorce tribunal, and even though Erdal shares the stage throughout with his younger sister, Talia Erdal, a cellist, he has not upped the ante by attempting to pass himself off as an actor.

Born in Israel in 1974, Erdal, an atheist, met Naomi when she was fourteen. She was a bit taller so she helped him pick fruit from a tree. That’s about all he will reveal. After he served his compulsory military service, they moved to Canada as a couple. They spent five years together, mostly not getting along. They were married by a justice of the peace in a living room in order to remain in Canada. He appreciated Canada more than she did. The marriage faltered.

A Canadian divorce was not good enough. Naomi wanted a sanctioned Israeli divorce. That way any of her children from a future union would not be regarded as bastards. Erdal agreed, for her sake, to return to Israel and undergo the ordeal.

The play largely consists of his recollection and re-enactment of an intense, humiliating and absurdist grilling by a (rabbinical?) trio of judges who question his identity and sincerity for five hours. An invisible Naomi sits by his side, never asked to verify anything.

As Canadians, we see this process as antiquated and vaguely Kafkaesque—perhaps sexist fodder for glib Woody Allen jokes. That’s why Erdal’s synopsis of Jewish history in sixty seconds is welcome and necessary: he tells us that prior to the creation of the modern state of Israel the Jewish people have only had a nation for 450 years. If you do the math and consider Jews have been country-less for all but 450 years of human existence, supposedly dating back to the time when the first Jew, Abraham, became the world’s “first monotheistic man,” that’s a heckuva record of endurance. This explains why administrative forces of Judaism have a deep-seated responsibility to the Jewish race to keep marriages from falling asunder. If Erdal goes back to Canada and marries outside of the religion, it contributes to the demise of Judaism. So pressure is exerted by the tribunal to prevent the divorce.

In order to get Naomi the divorce, Erdal has to lie. For her sake, not his own.

Although Robert Lepage is certainly in no danger of being eclipsed for stagecraft with this minimalist production, we are attracted by Erdal’s intelligence. If anything, on stage at least, he appears to be a much calmer person than he was five years ago. Most importantly, we get to learn stuff. And learning is seldom boring.

What makes Narrow Bridge odd is that Erdal’s agenda is familial as much as it is theatrical. He has gone to considerable lengths to incorporate his younger sister, Talia, into the show, including portions of a less-than-riveting video interview he conducted with her years ago, much like the video interviews with his mother that he inserted into his first show.

At one point Erdal and Talia speak to one another in Hebrew, as if the audience does not exist, and the musicality of their foreign tongue is like music. Again, the audience is appreciative.

While we have learned next-to-nothing about Naomi, we are told that Erdal’s sister went through a reckless period, having sex with older men, before she re-directed all her attention to her cello and conventional Judaism. The siblings remain close despite their opposing beliefs.

This is all very well, and even nice, but the divorce and the sister storylines don’t jive. Perhaps if Talia had been fluent in English, there could have been some input from her about his divorce, possibly disapproval. As it is, she’s basically there to play the cello.

We are told the title of the show is taken from a famous Jewish song that inspired Israeli troops. As a rule of thumb, if someone has to explain a title to you, it’s not a great title. The key line of the song is (paraphrasing), “When you have to cross the narrow bridge, the most important thing is not to be scared at all.”

What is the narrow bridge in this show? A guy getting a divorce with false testimony? The divide between Canada and Israel. Between religion and atheism? It’s a tad overwrought.

Still, this is an unerringly likeable construct chiefly because we get the distinct impression that Itai (pronounced Eee-tie) Erdal would much prefer to share a stage with his sister rather than win a prize or celebrity.

One also appreciates Canadian society in the process. Here we have a presentation under the aegis of the Chutzpah! Festival, staged in the undecorated boardroom of the Jewish Community Centre, in which a performer can clearly pronounce, “I think the Palestinians are paying the price for what the Nazis did to the Jews.”