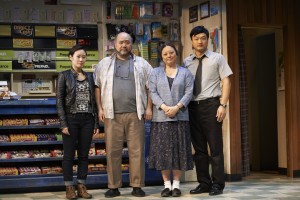 Gentle, more about wise, persuasive and funny, remedy the Soulpepper production of Ins Choi’s Kim’s Convenience hums along comfortably for 85 endearing minutes, confident of its success as heartwarming entertainment. It is easily one of the most enjoyable shows of 2014 to date.

Mr. Kim is a Korean immigrant who has devoted most of his life to managing a humble corner store since the 1980s, surviving by mostly selling lottery tickets, pop and cigarettes. His store happens to be in Regent Park, an area of Toronto, and he happens to be a Korean chauvinist, but there are corner stores like his, from Newfoundland to Vancouver Island, some of which have ignored child labour laws.

Kim’s only son named Jung (performed by the playwright, Ins Choi) has rebelled and disappeared from his father’s restrictive domain, leaving behind his 30-year-old, unmarried sister, Janet, to help her parents. She wants to become a professional photographer.

Condos are coming. A Walmart is going to open. Mr. Kim receives a lucrative offer to sell the store, to cash in his stale chips. He and his wife could finally retire with ease, not have to worry about shoplifters. But he is adamant about his decision to remain behind the counter. “My whole life is dissa store!” he explains. “If I sell the store, my story is over.”

Having already earned the Toronto Theatre Critics’ Award for Best Actor in 2012 for his interpretation of Mr. Kim, Paul Sun-Hyung Lee sails through his comic tantrums and mispronunciations with the grace of a lovable character in a long-running sitcom, dancing his voice through the script with the effortlessness of Fred Astaire doing a two-step. There is never a moment when he falters, and this unerring confidence lends credibility to the stubbornness of the character he is portraying.

The splendid set by Ken MacKenzie is unmistakably realistic; the action is not. There are lots of hokey moments, occasions when we have to wonder if Ins Choi watched too many re-runs of The Beachcombers or Corner Gas. The comic acting often feels, well, Canadian, particularly when (Chantelle Han) reveals she is sweet on Alex (Andre Sills), the beefy cop who bashfully woos her.

Racism is deftly inserted throughout, as well as some ludicrous prejudices, but Mr. Kim is more of a humanist than Archie Bunker. He relates a lovely story about a Korean shopkeeper in Los Angeles who routinely lent small amounts of money to his customers. When the store was going to be ransacked during the Watts riots, his black customers formed a cordon around the store and saved his business.

Mr. Kim repeatedly reviles the Japanese who invaded Korea back in 1910, but he is more than happy to physically force Janet and the cop—who happens to be black—to kiss. He judges his customers severely, and comically, as the number one survival technique that he hopes to pass along to Janet as his chosen successor: Will they steal or not? He claims he knows the answer each time someone new enters his store.

There is a Canadian flag on the wall and a South Korean flag. Mr. Kim wants his children to be able to list all the proud moments in Korean history. When Japan and South Korea co-hosted the World Cup of soccer, for instance, the South Koreans advanced further than the Japanese team. It was a Korean American who gave the world the nectarine. And so on.

Pride comes before a fall, and also a falling out. Midway through the action, Mr. Kim and Janet have a major confrontation, each tallying in dollars their sacrifices to one another. There follows a scene in which Mrs. Kim meets secretly with their estranged son, in a church, to learn she has a grandson. Clearly the schisms of first-generation immigrants and their children born as Canadians can be immense, soul-destroying and too broad to countenance.

Kim’s Convenience manages to incorporate both comedy and pathos. With more chuckles than tears, this is a splendid love letter to the playwright’s parents.

“My father grew up in North Korea,” Ins Choi writes. “Since his birth, until the end of the Second World War, it was ‘occupied’ by the Japanese. Soon after WWII, the Korean civil war broke out. During that time, he and his family walked south, across the mountainous Korean peninsula with thousands of others in search of freedom.

“My mother grew up in an orphanage in war-torn South Korea raising her younger brother from the age of five. After graduating high school, she was working as a secretary for the government when she met my father.

“They set foot in Canada in 1975 with $200, three kids, and hope. My father worked at my uncle’s convenience store by day and went to ESL classes by night while my mother took care of me and my two older sisters. We lived with my uncle’s family in the apartment above their convenience store on Weston Road and Black Creek Drive.”

This is a touchingly comic and thoroughly Canadian play—not, God forbid, an Asian Canadian play—that no intelligent person will regret seeing.