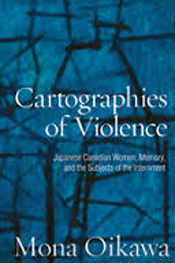 The number of Japanese Canadians incarcerated in Essondale Mental Hospital in March of 1943 was fifteen; that number increased to fifty-eight by October of 1945 due to World War II fears.

The Canadian government required mandatory testing for venereal disease for each incarcerated Japanese Canadian in B.C. who moved out of the province to eastern provinces in the 1940s. These are just two of the fascinating, online little-known details to be found in Cartographies of Violence: Japanese Canadian Women, Memory, and the Subjects of the Internment (University of Toronto Press $41.95) by Mona Oikawa, an associate professor in the department of Equity Studies at York University. Now available in paperback, this overview features interviews about internment that Oikawa conducted with women survivors and their daughters after more than 22,000 Japanese Canadians were forced out of their homes in 1942. Over 4,000 were deported to Japan. 978-0-8020-9601-2