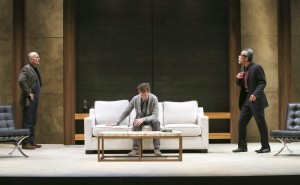 Full marks to the Gateway Theatre for taking a run at ‘Art’ by Yasmina Reza. Yes, search those quotation marks are part of the title.

‘Art’ is a hot property. After it premiered in Reza’s native France in 1994, it was translated by Christopher Hampton and ran for eight years in London’s West End. It didn’t hurt that British producers David Pugh and Sean Connery nabbed Albert Finney, Tom Courtenay and Ken Stott to play the three friends who comprise the entire cast. Alan Alda, Alfred Molina and Victor Garber (he’s the Canadian actor who played the Canadian ambassador to Iran in Argo, Ken Taylor) opened the Broadway version that won the Tony for Best Play.

There is not much of a story, there’s a minimal set, and Reza has taken pains NOT to make any of the three male characters particularly likeable, so ‘Art’ is a major challenge for any trio who want try this dark comedy on for size. Having just hit one out of the park with their recent King and I production, you gotta admire this Gateway U-turn in a decidedly opposite direction.

We meet three men in Paris who have known each other for fifteen years. Their camaraderie suddenly disintegrates after one of the men, Serge, buys a work of modern art that is a 5 ft. x 4 ft all-white canvas with a few barely discernible lines. Sorta like the Beatles white album except the price is 200,000 francs. Serge tells his friend Marc it’s a bargain.

Marc responds honestly, saying it’s “a piece of white shit.” As much as we want to agree with Marc and share his disdain for effete artwork at an absurd price, we have to wonder if Marc is also disturbed because Serge has uncharacteristically asserted himself, electing to become a serious collector in an effort to be superior.

Far less sophisticated, Yvan, a would-be intermediary, is marooned in a new job as a stationery salesman and nervous about his impending marriage. To keep the peace, he tells Serge he likes the painting and he tells Marc it’s worthless. When the three men gather in Serge’s apartment, Yvan’s duplicity is soon revealed and he is ridiculed as a hapless “little ass-licker.”

Self-congratulatory in their honesty, Serge and Marc seem to relish their schism, whereas meek Yvan is both horrified and mystified. “Why do we see each other if we hate each other?” he laments. Then Yvan humiliates himself further by actually crying—the ultimate locker room no-no.

So clearly ‘Art’ is not a play about art. When Marc asks, “What is deconstruction?” we don’t care if there is no answer. ‘Art’ is an exploration of the fragility of friendship. Like two long-time neighbours about to come to fisticuffs over a parking spot, Serge and Marc are willing to jettison all fraternity over a painting in order to prove to one another they are real men who do not compromise their beliefs.

“I just want to be your friend,” Ivan pleads. His sniveling only merits disdain from the testosterone-pumped duo who decide they should blame the entire schism on Yvan for showing up late for their dinner outing. This could be either funny or sad; but in this production it is merely ludicrous.

There is climax of sorts involving a dare from Serge. He invites Marc to see if he is man enough to desecrate the white canvas with a blue pen. The audience doesn’t gasp. For this particular production, directed by Stephen Drover, the audience mostly peers towards the stage like they’re watching a marital spat through a window from the street.

These are not characters you would want to know—and that’s fine. Millions of people watch Jerry Springer, the The Maury Povich Show or Family Court. Hey, disintegrating lives can be fun. But, as written, Serge (Hiro Kanagawa) and Marc (Michael Kopsa) are completely lacking in compassion, so Yvan (Haig Sutherland) is pivotal as a middle man who must engage the audience’s sympathies—the scarecrow between the lion and the tin man.

‘Art’ is David Mamet-lite. You don’t get outright fury. So how does one portray muted antagonism? We should be fascinated, not just curious, so one leaves feeling grateful for having had a chance to see this talked-about play, simultaneously wondering how it might have been done differently.