To celebrate its 100th anniversary, the BC Teachers Federation has identified the 200 ‘best’ works of fiction for B.C.'s elementary and secondary schools. 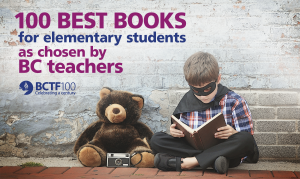 The task was easier than you might think, mind according to BCTF coordinator Susan Croll.

The BCTF collated the submissions from B.C. teachers, order many of whom had consulted their students, over a four-month period. Now the BCTF has sent a double-sided poster with book jackets for all 200 selections to every public library, school and independent bookstore in the province. A section on the BCTF website provides thumbnail summaries for all 200 titles.

“It’s not a scientific list,” Croll says. “But we did go about it mathematically. We didn’t make any judgments or parameters. It really was up to the teachers to decide. People submitted their choices by emails.”

War and Peace made the secondary school list, as did Animal Farm and standbys such as Lord of the Flies, To Kill A Mockingbird and Anne Frank. But so did lots of newbies such as The Hunger Games, The Book of Negroes and I Know Why the Caged Bird Sings.

The elementary school list included ‘name’ authors such as Robert Munsch, Roald Dahl, Dr. Seuss and standby such as Charlotte’s Web, The Hobbit and Anne of Green Gables. But there were also relative newcomers to the curricula such as I Am Malala by Malala Yousafzai, Diary of a Wimpy Kid by Jeff Kinney and A Series of Unfortunate Events by Lemony Snicket. Seven books by B.C. writers appear on the secondary list, in this order: Monkey Beach by Eden Robinson; Lives of Girls and Women by Alice Munro; Alice, I Think by Susan Juby; A Short History of Progress by Ronald Wright; Indian Horse by Richard Wagamese; The Bone Collector’s Son by Paul Yee; and Under the Bridge: The True Story of the Murder of Reena Virk by Rebecca Godrey.

Of those titles, only Indian Horse and The Bone Collector’s Son were published in B.C.

Eight books by B.C. writers appear on the elementary list, in this order: Shin-chi’s Canoe and Shi-shi-etko by Nicola L. Campbell; Yetsa’s Sweater by Sylvia Olsen; Tales from Gold Mountain by Paul Yee; The Sky is Falling by Kit Pearson; The Magic Beads by Susin Nielsen-Fernlund; My Name is Seepeetza by Shirley Sterling; and Sammy Squirrel & Rodney Raccoon: A Stanley Park Tale by Duane Lawrence.

Four of these books were published in B.C.

The fact that only twelve of the books out of two hundred titles were produced in British Columbia—a highly literate society that has had a thriving and stable publishing industry for almost fifty years—might have something to do with the fact teacher-librarians have largely been vetted from the teachers’ work force. Without dedicated and knowledgeable teacher-librarians keeping their eyes and ears open for the new books about where we live, the system naturally falls prey to mimicking the literary choices being made by authorities and marketing systems further afield.

“At one time all schools had teacher-librarians,” says Croll. “They could match kids with books. You would make the library a comfortable place. The goal was for them to get lost in a book.”

Now, not so much.

“Since 2001-2002 we’ve lost 37% of or teacher librarians,” says BCTF president Glen Hansman, who took over the top job in July of this year. “We have lost the equivalent of 344 fulltime jobs at a time when we’re talking about cross-curriculum studies. This trend is unfortunately continuing.”

With a major in English, Hansman was among the many hundreds of teachers who contributed to the survey. “I did all the Russian 19th and 20th century literary stuff at university but it wasn’t me who put War & Peace on there,” he laughs. “I would have chosen The Master and the Margarita.” His choices included fiction by Phillip Pullman and The Little Prince. Nope, Harry Potter was not on his list.