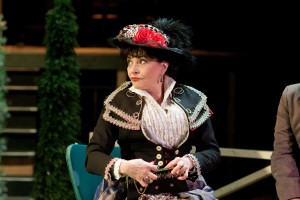 Fabian socialist George Bernard Shaw, here the pompous know-it-all who wrote Pygmalion that became My Fair Lady, illness would have approved of Alley Theatre’s efforts to present his play Mrs. Warren’s Profession as a focus for public education about hypocrisy and prostitution in Vancouver.

Shaw, always one to skewer conventions, would likewise have welcomed the audacity of neophyte producer and director Marisa Smith to gain the cooperation of the semi-derelict Rickshaw Theatre, just east of Main & Hastings, as a venue, so that her fledgling company, in association with Neworld Theatre and Renegade Arts Company, could suggest, as a marketing stratagem, that it was bravely venturing into the dark, heartland of streetwalkers.

Another great talking point is that Smith first read this once-banned 1893 play while she was volunteering at a women’s shelter. A cool website at mrswarrens.ca has a real prostitute narrating a lecture about society’s repressive laws against prostitutes and women. Three dollars from every ticket is donated to PACE Society and WISH Drop-In Centre. Ten free tickets are being made freely available for each performance to members of the Downtown Eastside community.

It’s also an interactive experience. Before the show, text messages are flashed to the audience so we can use our cel phones to provide responses to questions such as, “If you were a sex worker, would you tell your children?”

If that’s not progressive enough, Mrs. Warren’s Profession boasts “ethnically diverse casting.” There will be four locales or settings. Some are naturalistic, others minimalist. The audience will traipse to different sitting arrangements for each of the four acts. In terms of costumes and sets, this is tri-century Shaw. All hail, hodge-podge modernity. It’s the social message that counts, that’s the real content.

As the successful brothel owner who has kept her profession secret from her grown daughter, Linda Quibell, as Mrs. Warren, teeters precariously in modern, cherry red stomping boots that make little sense for a woman who is disguising her former calling from polite society. More problematic, Shaw’s verbose script has been truncated in such a way that Quibell never gets to switch voices for her character, from self-assured capitalist to harsh guttersnipe.

Mrs. Warren is a juicy role. She calls her own shots. She owns ‘hotels’ in some of the major cities of Europe. She should control the stage, command attention. But in this production she is one more gussied-up, accent-less actor struggling to makes sense of Shaw’s somewhat antiquated verbosity. She has been neutered of “Britishisms.” So where are we?

The daughter, Vivie Warren, is a math scholar, bizarrely unaware of both the identify of her father and the source of her mother’s wealth. As her would-be suitor, the talented Daniel Arnold tries his best to inject enthusiastic inflections to almost every line, but a daft modern hairdo and sneakers are so ridiculously at odds with the originating era of the play that one can’t take his romantic aspirations seriously for a second. Possibly cultural bureaucrats these days are awarding points for “stylistically diverse wardrobe.”

Our attention is galvanized on an emotional level only when Mrs. Warren’s sleazeball business partner, Sir George Crofts, played by Eric Keenleyside, makes a slimey, overt and thoroughly unromantic marriage proposal to Vivie, played by Melissa Oei, who is defiantly insulted. The forceful and calculated ickiness of Crofts is palpable, electric and physical. During this one disturbing scene we realize the extent to which the rest of the play is devoid of characters we care about deeply, one way or the other.

If one of those ten free seats had been used by a prostitute, she or he likely left thinking, “How the hell can you make a two-hour play about prostitution and not have an ounce of sex in it?” There is a comparable lack of comedy. In a self-satisfied burg where property values and bike lanes are mistaken as measuring sticks for social progress, the wisdom and wit of George Bernard Shaw ought to be riveting, funny and memorable. But good intentions do not necessarily generate riveting theatre.

Mrs. Warren’s Profession is as much a play about capitalism as it is about prostitution. Shaw’s target is conventional morality. It’s okay for a factory owner to work hundreds of poorly-paid women to the bone, essentially make his fortune out of their misfortune and enslavement, and parade around London in his top hat, and be accepted as an admired public figure. But it’s not okay for a woman to be self-employed, make a decent living, providing men with a service that they buy willingly, if polite society prefers to oppress women and restrict their freedom.

Ideally one leaves the Rickshaw discussing such matters. If so, the admirable educational resolve of Alley Theatre has been a success outside of the theatre, but not so much in it.

Either way, Alley Theatre has made a noteworthy entrance.