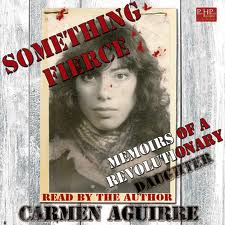 Soon after Carmen Aguirre’s Something Fierce: Memoirs of a Revolutionary Daughter won the Canada Reads competition in 2012, book sales flourished. She was owed $60,000 in royalties by the time Chairman Scott McIntyre of Douglas & McIntyre filed for creditor protection under the provisions of the Bankruptcy and Insolvency Act. She never received any of that money. It was a devastating scenario for Aguirre who makes her living as a writer, actor and an independent theatre artist.

A fundraiser called Gran Malón will be held on June 9 at Heritage Hall at 3102 Main Street in Vanouver to help Aguirre through a difficult period. There will be food, readings and performances, as well as autographed copies of the Douglas & McIntyre edition of Something Fierce for sale but all proceeds will go directly to Carmen. In addition, organizers are asking for financial contributions from those who attend.

Malón is a Chilean term of Mapuche origin. Initially, its meaning had to do with Mapuche raids/assaults on the Spaniards, but in the last sixty years it has evolved to mean a big party where everybody “takes over/assaults” somebody’s house (with their previous consent) and contributes with food, music and whatever else is needed to have a good time.

Tickets are priced at $20 to $500. Attendance can be in-person or virtually as the event will be streamed live over the Internet. The Malón will take place from 7:30 to 10:00 p.m. at the Heritage Hall on Main Street in Vancouver.

For tickets and donations: http://www.eventbrite.ca/e/gran-malon-in-solidarity-with-carmen-aguirre-tickets-11372775277 Something Fierce is a memoir about Aguirre’s militancy in the Chilean resistance during the Pinochet dictatorship, is set between 1979 and 1989, and also takes the reader inside war-ridden Peru, the Bolivian dictatorship and post-Malvinas Argentina. It won top prize in Canada Reads contest on the strength of arguments put forth by Canadian rapper Shad, one of the five judges in the competion that was hosted by CBC’s Jian Ghomeshi. It won in a final vote of three-to-two over the hockey book, The Game, by Ken Dryden, championed by judge Alan Thicke.

A previous book by Aguirre, The Refugee Hotel (Talonbooks, 2010) set in Vancouver, is a comedic drama reflecting the predicaments and concerns of refugee communities worldwide while focusing upon Chileans who fled their homes in the wake of Augusto Pinochet’s coup in 1974. Aquirre was featured on the cover of BC BookWorld in conjunction with her first book, The Trigger (Talonbooks, 2008) about rape.

Working from Vancouver, Carmen Aguirre is a theatre artist who has worked extensively in North and South America. She has written and co-written eighteen plays. As an actor, Aguirre has dozens of film and TV credits, including a lead role in the independent feature Quinceañera, winner of the Grand Jury Prize and the Audience Award at the 2006 Sundance Film Festival, an Independent Spirit award, GLAAD awards and various People’s Choice awards at festivals around the world. As a stage actor, Aguirre has worked with a host of Vancouver theatre companies. Aguirre was the founder and director of The Latino Theatre Group, was playwright-in-residence at The Vancouver Playhouse from 2000 to 2002, was playwright-in-residence at Touchstone Theatre in 2004, and facilitates Theatre of the Oppressed workshops around the province.

3 Responses to “Fundraiser for out-of-pocket writer”