From the beautiful to the bizarre

It was not all sweetness ‘n’ free love back in the Sixties. 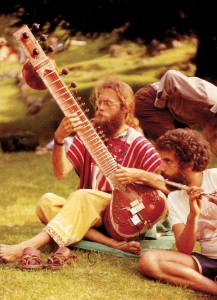 Lasqueti Island fostered a colourful, counter-cultural community during the 1970s and early 1980s.

Douglas L. Hamilton and Darlene Olesko’s Accidental Eden: Hippie Days on Lasqueti Island (Caitlin $24.95) tells it like was. It’s a riveting and responsible reflection of back-to-land idealism, ingenuity and goofiness.

Rather than a paean to eccentricity and bucolic sharing, Accidental Eden is an amusing, warm, smart and well-written local history that includes a chapter on the unsolved murder of longtime resident Terry Beck in August of 1980 when he was shot with an ancient .303 rifle, whereupon an islander named Brother Richard disappeared soon afterward, possibly murdered for knowing too much. More often levity and kindness were the norm, and Lasqueti Islanders became justifiably renowned as purists who refused mod cons. Specifically, the community convinced BC Hydro to re-route its Cheekye-Dunsmuir power line around, rather than through, their island, changing the way BC Hydro managed its power delivery into rural areas.

Here’s an excerpt, written by Douglas L. Hamilton, that captures some of the zeitgeist of those times.

[The cover photo of a sitarist on Lasqueti Island is by Barry Churchill, courtesy Caitlin Press]

“Saint-like, he was mortifying the flesh like someone right out of the Middle Ages.”

Islands have a well-deserved reputation for attracting odd and curious characters. Certainly one of the strangest was Bobby the projectionist.

Bobby first arrived on the remote south end of Lasqueti in the mid-seventies, a refugee from the city and his irregular job as a theatre projectionist. Softspoken, of medium height with laughing, watery eyes, he was always more than willing to pitch in and help, yet at the same time he remained distant and remote. But what really set him apart was his bizarre affect and appearance. Bobby invariably appeared in public draped in a coarse, black horse blanket tailored like a priest’s habit, which he wore rain or shine. His long, grey hair was done up in a neat bun on the top of his head, which was capped by a peaked hood. The flowing robes stretched discreetly to his ankles, often seriously impairing mobility. Like Friar Tuck in the movie Robin Hood, he secured his ample belly with a piece of frayed manila rope. Bobby made no secret of his disdain for shoes, and almost always went barefoot—even when it was flooding or there was snow on the ground. We wondered about frostbite, but he never complained. The impression from afar was that of a stooped, elderly penitent preparing to celebrate Mass. One summer’s day, a group of us were chatting it up on the back of the Lasqueti ferry, the Captain Vancouver, as she slowly rolled her way toward French Creek. Bobby seemed uncomfortable and was fumbling with his thick, woollen habit when there was a loud clank as something heavy and metallic hit the deck. Startled, we all peered down to see a sixty-centimetre military bayonet lying at his feet. Without missing a beat and carefully avoiding eye contact, Bobby bent down to retrieve his pigsticker. Alas, Captain Cole, who just happened to be passing by, was quicker and smoothly scooped it up. Depending on his alcohol level, Cole’s mood could vacillate wildly between a mellow love for mankind to a testy intolerance for all warm-blooded creatures. Fortunately he was in a good mood that day. He held up the piece of heavy steel for minute examination, grinned blearily and said to no one in particular, “I’ll just be holding this for safekeeping upstairs. The owner may collect it in French Creek from the captain’s cabin.” With that, both Cole and the bayonet exited majestically into the wheelhouse. We all turned to Bobby, waiting expectantly for an explanation or jocular remark, but he simply smiled vaguely and remained mute. When we reached French Creek, all watched in fascination as Bobby dutifully headed up to the captain’s cabin.

Just what our companion intended to do with this war relic remains a mystery to this day. It could have done serious damage had it had fallen on someone’s foot and must have been a heavy and awkward burden to lug around Parksville on a day’s shopping trip. While eccentric, Bobby seemed a peaceful person incapable of hurting a fly. Perhaps he saw himself standing off against a group of young toughs at the Rod and Gun beer parlour. “Back off, gentlemen, or taste the cruel steel of my hallowed blade.” Or perhaps those thousands of kung fu movies he had projected over and over in the movie theatres had finally taken possession of his psyche? Whatever the case, we were all left wondering.

Bobby combined his sublimely rich fantasy life with a dark desire to mortify the flesh. This took the form of a kind of self-abuse in which he attended to the normal routines of life with a special handicap to make things just a little more interesting. One afternoon, while helping his neighbours with a cabin-raising, his horsehair cloak fell away to reveal a curious sight. His upper torso and arms were wrapped tightly in serpentine strips of black inner-tubing. Care had been taken not to cut off all circulation, but the skin surface was covered with angry red welts. Again, Bobby avoided eye contact and replaced his habit without comment.

Several days later he was seen limping around the local clam bed, laboriously collecting dinner. He seemed unsteady on his feet—almost drunken— and was having real problems stooping down. A group of us approached to offer assistance and have a neighbourly chat and we discovered the problem. Bobby had nailed a one-by-four-inch board to his right leg with finishing nails. Saint-like, he was mortifying the flesh like someone right out of the Middle Ages. It was a surreal moment, and a little too much for some—the crowd quickly faded away. Bobby neither asked for help nor offered to explain his predicament. Were we supposed to comment, or pretend not to notice? No one wanted to intrude, and after a bit of desultory conversation the penitent returned to his solitary clam digging. In those far-off days many of us liked weird people, the weirder the better. Life on remote islands encourages tolerance. Nowhere else on the planet will one encounter a more eclectic assemblage of misfits, geniuses and dreamers. But in retrospect I wish we had been a bit more aggressive in helping this fellow confront his demons.

Bobby’s stay on the island came to an abrupt and surprising end that summer. He had become good friends with Keefer, one of the owners of Rouse Bay, who encouraged him to stay on as a part-time caretaker. Keefer asked for only one thing in return. He wanted Bobby to vacate the house once a year so he could spend a few weeks in solitude at a truly beautiful and remote island paradise. Keefer arrived as planned and drove Bobby to the ferry, where he was to connect with a projectionist gig in town. The happy owner returned home, doffed his clothes and ambled down to the beach for a refreshing swim. The peace and quiet was just what Keefer needed to shake out the wrinkles of urban life, and he passed ten days and nights in blissful reverie without a single visitor. On the last day, while he was packing for a return to Seattle, the phone rang. It was an urgent call offering another projectionist job for Bobby. Keefer apologized, saying he knew that his caretaker would be happy to take the job, but that he was booked up until the end of the month. He was about to hang up the phone when there was a soft scuffling from overhead. The trap door to the attic slowly slid aside, and a cloud of cobwebs cascaded onto the kitchen table.

“No,” a muffled voice called out. “I’m here, and I’ll take the call.” It turned out that Bobby had been living incognito in the dusty attic for the entire duration of Keefer’s vacation.

Darlene K. Olesko was born in Portland, Oregon, but was drawn to Lasqueti Island during the “back to the land” movement in 1971. She has many creative outlets, including music, writing, painting and building stuff. Darlene represented Lasqueti with an article and map in Islands in the Salish Sea and co-authored and illustrated the first Lasqueti Island cookbook. She continues to live on Lasqueti Island at the very end of Spinster Flats Road (where the ditch is washed out) and enjoys her grandsons’ company, snow sports, travelling, kayaking, biking and endless manual labour on her sixteen acres.

Douglas L. Hamilton was born in Washington, DC, and received an MA in history from the University of California, Riverside. Inspired after a brief vacation to British Columbia in the early 1970s, he moved to Lasqueti Island where he built a squatter’s shack made of driftwood on an isolated beach. Soon after, he became interested in writing history pieces for magazines, and his stories have appeared in Pacific Yachting, Raincoast Chronicles, Canadian West and True West. His book Sobering Dilemma: A History of Prohibition in British Columbia was published by Ronsdale Press in 2004. Hamilton now lives on his property on Lasqueti Island, with his partner, her harpsichord, three cows and a flock of chickens. 7 Responses to “From the beautiful to the bizarre”