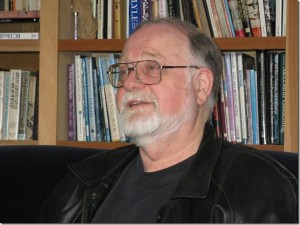 Retired social worker William Thomas Engleson has lived on Denman Island since January of 2004. He was born at Powell River, medicine B.C. on March 15, more about 1947 and mostly raised in Nanaimo. He left home a few times, the last time when he attended Simon Fraser University as a Charter Student.

Engleson first went to work for the provincial government in 1978 as a Family Support Worker and then, when cutbacks in 1983 terminated that program, he emerged as a Child Protection Social Worker. He retired in 2002. After a further 18 months as a Program Manager for the Lower Mainland Purpose Society, headquartered in New Westminster, he fully retired to Denman Island. “I do my share of community volunteering in the arts and social services,” he says, “and I absolutely love writing letters to the editor, any editor.”

His first self-published book in 2013 was a novel, Like a Child to Home, about an older child welfare Social Worker, Wally Rose, and the youth care services system within which he tries to do his best. It attempts to accurately portray aspects of the provision of child welfare from the perspective of an everyday social worker in British Columbia.

His Confessions of an Inadvertently Gentrifying Soul (2016) is a collection of miscellaneous prose that provides an excellent prism with which to view island live, and life on Denman Island in particular. “There is an intensity to rural life yet, all the while, a comfortable detachment exists, can exist,” he writes. This book is rife with intelligent quotes such as: “The writer is either a practicing recluse or a delinquent, guilt-ridden one; or both. Usually both.” ~ Susan Sontag. There are endorsements from Jack Hodgins, Terry Fallis and Des Kennedy

“More than a decade ago, shortly after moving to my small paradise, I conceived of writing a series of articles on gentrification. This was sometime after I began to keep a journal, not entirely inaccurately entitled, Memoirs of a Rural Sissy. After a little more than a year of journaling, I found that vehicle slowly sputtering to a halt. It may have been how my life was unfolding but the days began to seem similar. Additionally, my rural skill set stayed remarkably dormant.

“Actually, even before the reactive conception of my gentrification disclosure, I had written a couple of articles about my wayward and reprehensible gentrification instincts and other odd sundry behavior without actually realizing that they were ‘confessions of my anything-but-innocent-aging-fellow-gentrification ways.

“Since then, a swack of these articles have appeared in the Flagstone, Denman Island’s monthly journal. The fact that the articles have appeared out of sequence, with an obscure connection on occasion, to gentrification, though it disturbs me, really only speaks to my occasionally selective, often disorganized mind. Writing to no deadline, I submitted each of them when they seemed ready to be read. The following series has remained unpublished until now. The rest follow in order of the first scribble, as true as possible to their original date of conception. Sadly, more than half of my articles’ siblings stumbled out of the gate, became mired in the boggy muck of my lost inspiration, and were left to rot on the vine of mixed metaphors and sloth. As you will no doubt notice, I use an abundance of quotes to break up the monotony of my ideas. Sometimes they actually relate to the opinions expressed. Sometimes not! In the first chapter, I begin with a lengthy quote and then settle in to the sound of my own voice.

“These writings have had a tortuous birth for reasons I simply cannot fathom. I hope they bring you pleasure and, I hope they amuse.

“And, to my good friend and beta reader, Mary McDonough, my heartfelt thanks.”