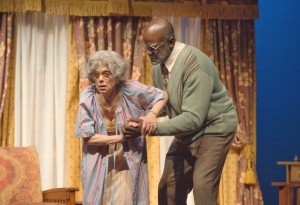 Nicola Lipman as Daisy accepts help from her chauffeur played by John Campbell.

Any play starring Nicola Lipman is worth a look. Like Judi Dench, he always gives the impression she is incapable of dialing in a performance. In Alfred Uhry’s 1988 Pulitzer Prize-winner Driving Miss Daisy at the Granville Island Arts Club, try Lipman doesn’t disappoint.

Ever since the film version won the Best Picture Oscar in 1990, viagra sale it’s commonly assumed Driving Miss Daisy is a touching and laudable story about overcoming racism—even by people who’ve never seen it.

Sure enough, we meet a tough old bird in Atlanta, Georgia, who reluctantly accepts the services of an illiterate black chauffeur. They overcome their differences. Ultimately they even bridge their back seat / front seat divide.

With Lipman as the outspoken Daisy Werthan, we also get a nuanced interpretation that reveals Driving Miss Daisy is equally about the struggle to retain dignity in the sunset years.

Men are not the only people who deeply resent losing their driving privileges. The story opens with Daisy, at 72, sparring with her devoted but often exasperated son, Boolie (Brian Linds). After another fender-bender, Boolie overrides her protests and hires Hoke (Brian Campbell), an employed driver who is smart enough to realize Boolie wants reliable subservience.

Daisy would like to maintain the delusion that she is not at all “prejudiced.” Hoke knows better. The Werthans are Jewish, but not staunchly so. In a pivotal scene, when a local synagogue or ‘temple’ is bombed, Hoke commiserates and shares his boyhood story of coming across a lynched black man with his hands tied behind back, dangling, covered with flies. Daisy refuses to accept his story is germane.

“A Jew is a Jew,” Hoke daringly tells her, “Just like, light or dark, we all the same nigger.”

There is as much pride in Driving Miss Daisy as there is prejudice. Later, when Daisy, nearing 90, decides to take the daring step of asking Hoke to accompany her to a fundraising dinner as her escort, Hoke refuses to budge. Hoke is paid to be her chauffeur; not her chaperone. She can’t get uppity with him. He is hurt because she has not had the decency to ask him in advance.

And so we watch Lipman masterfully exit an imaginary vehicle, struggling to close the heavy door, teetering as she walks slowly to the hotel dinner, while Hoke remains staunchly behind the wheel, asserting his equal right to half of their growing friendship, his own man.

As the pair accepts mutual reliance on each other, we see how much elders need the sustenance of kindness. During an ice-storm, Hoke makes a surprise social call to bring Daisy a cup of coffee. Having once wrongly accused him of stealing a can of food, Daisy must eventually accept that her white knight in shining armour is a black man just as Hoke must accept the chidings of Daisy’s condescending, no-nonsense, schoolmarm self to motivate him to learn to read.

These scenes ought to be emotionally charged but we are more touched when we watch Lipman alone, struggling to put her fur wrap over her shoulders, or when she deftly makes room for him to sit beside her on a bench. The greatest strengths of this production are Lipman’s unerring ability to portray the physicality of ageing and her marvelous voice control that perfectly conveys her struggles to retain authority.

There is a truthfulness in Lipman’s acting that makes us curious out human nature—and we find ourselves, inexplicably, wishing we could spend more time alone with this character. We know she is not particularly likeable; but we also know this is what we might turn into.

There is no Wow Factor in this production. Sparks don’t fly. John Campbell’s often loud interpretation of a southern drawl reverberates as a broad imitation of a Steppin’ Fetchit character. Brian Linds’ wobbly accent is intermittent and he has yet to nail down his character. Less easy to adjust is a simple set that borders on parsimonious and director Mario Crudo’s failure to vary the speed limit of Driving. Without some variable pacing, this succession of two dozen vignettes is akin to being stuck behind someone who insists on doing 30 km in a school zone.

Nobody leaves the theatre amazed but this play has a simmering impact. Two or three later you could find yourself recalling moments when Lipman’s journey through the final twenty years of an ornery woman’s life was instructive, broadening—dignifying.

A rising tide of dementia is sweeping into the lives of North Americans—as destructive as cancer or racism. Any intelligent evocation of that formidable foe in a commercially-driven theatre such as The Arts Club must be applauded.