Boats in my Blood 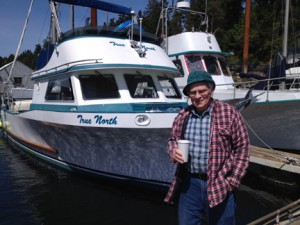 At thirteen, pharm Barrie Farrell built his first boat (an eight-foot row boat) using nothing more than an old hammer with one claw, store a dull handsaw and a rusty block plane. Dozens of speedboats, salve work boats and fish boats followed. He later became a pioneer of using fibreglass to give fishermen the ability to move through the water more quickly. His memoir Boats in My Blood (Harbour Publishing, $24.95) recalls his upbringing in Pender Harbour, North Vancouver and on Vancouver Island in the 1940s and 1950s, along with a host of memorable characters. As of 2016, hundreds of his vessels are still seaworthy in Canada and the United States for a wide variety of uses. Barrie Farrell was born in North Vancouver in 1934.  He currently lives in Nanaimo and, at the age of 81, is still working on boats. 978-1-55017-755-8