How a budding archivist got her Bazzy

Former librarian Jean Barman traces the origins of French Canadians, Furs, and Indigenous Women in the Making of the Pacific Northwest (UBC Press), her 21st book. 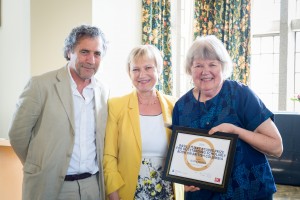 Here are Jean Barman’s remarks at UBC Library on June 9 as she received the third Basil Stuart-Stubbs Prize.

I am honoured to receive the Basil Stuart-Stubbs Prize for Outstanding Scholarly Book on British Columbia, and want to thank everyone involved.  Brenda [Peterson], you have championed the prize from its beginnings in a truly remarkable way. Ingrid [Parent] and Alan [Twigg], your support has ensured that the prize will continue on a permanent basis, as all of us who have encountered Basil Stuart-Stubbs know that it must.

I am not sure of the protocol respecting judges, but well aware of what a time consuming process it is, and thank the three judges on behalf of all of us.

Much as with the Basil Stuart-Stubbs Prize, French Canadians, Furs, and Indigenous Women in the Making of the Pacific Northwest was a collaborative effort. At UBC Press, Darcy Cullen and Ann Macklem were stalwarts in nudging the manuscript towards publication, Kerry Kilmartin outstanding in the book’s promotion, Mellissa Pitts excellent in overall charge.

I have had some remarkable supports along the way. The first is Bruce Watson, whose biographical data from his published Lives Lived West of the Divide was the basis for the 1,240 French Canadians I profile in the book. Thank you, Bruce.

Second, I thank my husband, Roderick Barman, for his sustenance of the book and of myself at every turn. And, third, thank you, Rejean, for reminding me from time to time what is that French Canadians, Furs, and Indigenous Women is about.

I have been asked why I wrote this book. I have two responses.

The first is that I, quite literally, woke up one morning wondering why I had ignored French Canadians in my general history of British Columbia, The West beyond the West. Was it, I asked myself, because French Canadians played no role? Or had they been overlooked? I determined to find out. And so here we are today.

The second response to the question of why I wrote this book is much more relevant to our being this afternoon in Basil Stuart-Stubbs’ shadow in a library so closely associated with him. Basil and I talked several times about my other life, making it particularly appropriate for me to share it with you.

French Canadians, Furs, and Indigenous Women and my earlier books exist for one very important, absolutely critical reason. I am first and foremost an archivist and professional librarian.

It is those skills which make it possible for me to research and write as I have done over the years on oftentimes obscure topics. I am able to scour libraries and archives and to search out source material at the drop of a hat. My librarian and archival skills mean, as those of you who share them with me are very aware, we understand how knowledge is organized. We know as a matter of course where to go in order to find out what it is we want to know and then how, respectfully, to make the best use of what it is we find out. More than any of the academic degrees I possess, it is my understandings as a librarian and archivist that underpin by career as an academic and a writer.

Not only that, as my husband has requested me to add, my expertise has spilled over onto his career as a historian of Brazil. Without that which I take for granted, he would not have written his prize-winning biography of the emperor of Brazil or that of his daughter, much less become the academic he has been at UBC, which includes his teaching for several years in the Archival Studies program. My husband’s request caused me to think more generally about the spillover from my being a librarian and archivist. I realize on reflection that my expertise has markedly affected the quality of the dissertations of the two dozen doctoral students I have supervised and the 40 some others on whose committees I have sat, as well as the theses of the 65 some masters’ students with whom I have been involved. Each of these 130 plus UBC graduate students, as well as those I have taught over the years, has benefitted from my counsel as a librarian and archivist.

Knowing that many of you are probably asking yourself, if she claims to be a librarian and archivist, why is she is not one today? I want to take a few minutes in conclusion to explain the seeming contradiction.

My story begins at Harvard, where I did a graduate degree in Russian and African Studies. I had the unparalleled opportunity to roam the seemingly endless stacks of the Widener Library, wondering as I did so why books, and thereby knowledge, were not where I intuitively expected them to be, but rather organized in such a peculiar way seemingly impossible to figure out.

This seeming contradiction I took with me as I moved on in my life to working as a writer/journalist on Soviet foreign policy in London, moving a year later to Berkeley, California, for my husband to pursue a doctorate in Brazilian history, and then to Rio de Janeiro for his dissertation research.

In Rio I was at loose ends until invited by a Brazilian archivist friend of ours to organize and catalogue under his mentorship the papers of a leading 19th-century Brazilian politician held by the Brazilian Historical and Geographical Institute and another set of papers in the National Archives, of which he was vice-director. Not knowing how to do this, I cajoled the library of the American Consulate to lend me a copy of Theodore Schellenberg’s Modern Archives: Principles and Techniques (University of Chicago Press, 1956), which I literally memorized from cover to cover.

My year and a half as a practicing archivist encouraged me to apply while we were still in Brazil for admission into the University of California Library School to do a graduate degree in archives management. Brazilian mails were very erratic at the time, which meant only the admission form arrived, which I promptly returned.

The consequence was that only on our return just before classes began did I discover there was no archives program, but only courses in librarianship. It was in good part due to my memories of aimlessly wandering the Widener stacks that I went ahead and completed an MLS degree. I was invited into the doctoral program about the time my husband got a year’s job at the State University of New York in Albany, where I did the original cataloguing of a large Brazilian Portuguese-language collection its library had just acquired.

It was thereupon my budding career as an archivist/librarian imploded. On moving to Vancouver for my husband’s job at UBC, I got myself credentialed as a professional librarian in British Columbia and sat in on a graduate course at UBC with the amazing George Piternick, but that was the end of the road. There were no jobs to be had as a part-time librarian, which I was due to two children at home, no doctoral program to continue on my interest as I would have at Berkeley, and no direction to head.

So it was that half a dozen years later I enrolled to do a doctorate in Educational Studies at UBC, which at the time had a very exciting group of historians of education. My dissertation became my first book, Growing Up British in British Columbia: Boys in Private School which was also published by UBC Press. Shortly thereafter I joined Educational Studies as a faculty member, and it was from that very strong interdisciplinary base, grounded in my other life as an archivist and librarian, that I have taught, researched, and written.

So it is that in acknowledging French Canadians, Furs, and Indigenous Women in the Making of the Pacific Northwest with its multifaceted research base interrogating a previously unknown topic, we honour the disciplines of archival and library studies that both made the book possible and grounded the life of Basil Stuart-Stubbs.

One Response to “How a budding archivist got her Bazzy”