A fate worse than death 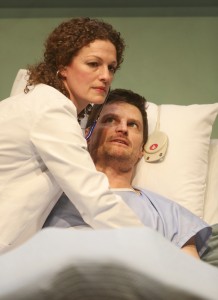 Who’s Life Is It Anyway?
By Brian Clark
RealWheels Theatre
The Cultch
March 11-22

Death has been around. Yet it’s still current. It’s right up there with Love and Hate. It never gets old.

So even though there was a movie called Who’s Life Is It Anyway? starring Richard Dreyfuss as a quadriplegic who wants to die back in 1981, patient and even though its author Brian Clark first explored that subject of legalized suicide as a television movie way back in 1972, this web the subject of assisted suicide on compassionate grounds is arguably as relevant as it has ever been now that Baby Boomers are starting to vocalize the need for right-to-die legislation in Canada against the grain of traditional medical practices and the diehard prejudices of religious nutbars who will argue extreme pain is God’s will.

As many Baby Boomers watch their parents suffer miserable deaths and incur major medical expenses in the process (despite socialized medicine), search and more of us wade through a hell of hopelessness and pain-ridden terminal illness that brings many families to their knees, the Boomers are rallying to bring Canada up to speed with more progressive nations in Europe.

Currently Belgium is the only country that enables people to stop living due to mental torment, but if you are in excruciating physical pain, and judged to be sane, it’s possible to get someone to pull the plug for you in the Netherlands or Switzerland.

We know that physicians and nurses already do help people die in hospitals, but even today it cannot be openly admitted. Quebec has just led the way. Soon Canadian legislators will have to heed the demands of their constituents and encourage Canadians to have an open debate about the merits of assisted suicide. Our society will soon collectively accept the need for a fractious debate on this subject in the same way that abortion was allowed to become a violently contested issue in the Seventies.

But first someone has to fire up the debate. That brave someone back in 1993 was MP Svend Robinson who daringly supported the right of ALS sufferer Sue Rodriguez to die with dignity, risking jail to do so. Since then BC Civil Liberties Association has been the foremost and most steadfast voice for right to die legislation in Canada.

And now we have James Sanders, founder of RealWheels Theatre. He has wanted to present Brian Clark’s Who’s Life Is It Anyway? as a play ever since Sanders became a young quadriplegic himself. Sanders was not able to take the title role himself–an articulate sculptor named Ken Harrison wants to die after he is completely paralyzed from the neck down due to an accident—but he has asked his friend Bob Frazer to spend two hours in a hospitable bed on stage in his place.

As directed by John Cooper at the Cultch, Who’s Life is a thoroughly engaging, mostly well-cast production, complete with obligatory cello music between scenes. It’s a well-written script that gives us what we expect: we meet one brave soul fighting against the medical system. Frazer is terrific as a determined smart Alec who is almost too intelligent for his own good.

With a ruptured spinal column, Ken Harrison resents the professionalism of hospital staff and excels at rude or risqué comments to female hospital staff. Only able to move his head and speak, he has discovered there is such a thing as a fate worse than death.

“My consciousness is the only thing I have,” he bleats, to anyone who’ll listen. That includes a would-be rapper who works as an uninhibited orderly, played by Marc Senior, whose physical grace and agility provides a poignant contrast to Harrison’s immobility.

The senior nurse, Sister Anderson, brilliantly played by Patti Allan, stiffly appears to pay little heed to Harrison’s incessant jibes, but is nonetheless deeply caring. The belligerent patient is far less abrasive with the naïve, much younger nurse, played by Pippa Johnstone, revealing he’s not all bombast and self-pity.

Harrison’s tauntingly sexualized relationship with his comely doctor, played by Jennifer Lines, is more complex. He must assert, to himself and to others, that he is still very much alive (or, as the Monty Python sketch goes, “Hey, I’m not dead yet!”) but his libidinous banter simultaneously complicates the potency of his argument that he has nothing left to live for.

Harrison’s chief adversary turns out to be the stern, dedicated and icey-faced head doctor, played convincingly by Michael Kopsa, who injects him with sedatives against his will and admonishes his staff with self-righteous dictums: “We cannot become bleeding hearts.”

The arrival of a sympathetic lawyer who agrees to support Harrison, played by Jeffrey Renn, kicks the action into high gear, leading to a courtroom-like finale played out in the hospital room. Although Marcie T. House falters in her role as the judge who presides over a hearing to determine Harrison’s fate, the drama is rescued by a lovely final scene between Frazer and Lines in which the opportunity for a “kiss of death” ensues. It is a powerful and memorable ending.

If there is a weakness to this play it’s the fact that Clark has greatly simplified the story by allowing the protagonist to jettison all loved ones from his life. It rarely happens that way. The fate of the person who wants to die is usually greatly complicated by the presence of hand-wringing relatives.

Kudos to RealWheels for mounting a fine version of a play that is smart enough to be entertaining throughout, never grim or flinchworthy. “A person might want to die for perfectly sane reasons,” says Dr. Scott (Jennifer Lines). That’s the message. It is not imprecise. Sometimes it’s crazy to live.

If you’re lucky, you won’t see this story played out for real in a hospital. Do yourself and society a favour; see it at the Cultch.