A deluge of devilry 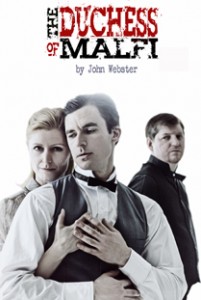 A hot summer night inside the air conditioned-less Jericho Arts Centre is not the best time to see any play—you’ve heard of hot yoga, health try some hot theatre—but a three-hour amateur presentation of John Webster’s outlandish Jacobean tragedy The Duchess of Malfi would require exemplary talent and astute staging to make it even close to bearable under ideal conditions.

The Ensemble Theatre Company falls hopelessly short of mustering such quality with such a difficult play. The vocal range necessary to convey crippling fear, visit cruelty, insanity, villainy, torture, dismemberment and approximately six brutal murder enactments—to say nothing of the requisite stamina necessary for this marathon—would be a tall order for a large troupe of even the country’s most experienced actors. Given hollow characterizations in which actors are mostly trying to deliver a perplexing text, not a single scene resonates with credibility. We don’t recognize any electricity, for instance, between two ill-fated lovers. Unable to care about the characters, we quickly renounce the desire to keep track of a bizarre and often unfathomable plot.

Well, that’s as good an explanation as any.

We’re on the Amalfi Coast. It’s the early 1500s. Two high-born brothers don’t want their sister to remarry. Women are expected to be submissive. The Duchess of Malfi nonetheless opts to secretly marry the good Antonio, who is far below her station. One of her brothers is a Cardinal who hates his sister but we’re not sure precisely why. The scheming Cardinal cavorts with a young, married mistress (who is inexplicably viewed naked in one scene, perhaps in an attempt to keep us awake); the other brother Ferdinand, the Duke of Calabria, is driven to persecute and torture his twin sister for seemingly sexual and sadistic motives that are made unclear due to an increasing haze of madness. He starts to simulate a wolf. He hires a former servant of the Cardinal, a thug, to kill the good Duchess, but then he ends up regretting it.

There’s more, much more. The thug and spy Bosola accidentally kills Antonio. A neck is broken with a resounding crack—probably the best moment in the show—and the good Duchess appears to be strangled to death. A severed head is dangled on a big hook. Most other murders are committed with big knives. These death scenes are macabre and stilted at the same time, bordering on comic. Like watching the Adams Family attempt Shakespeare.