And the beats go on 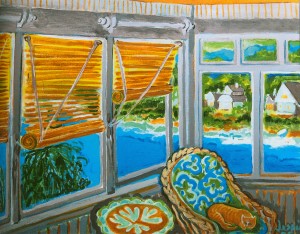 Painting by Jessie Webb of one of the many Dundarave beach cottages she and Harry Webb lived in during the 50s and 60s.

An art EXHIBITION in conjunction with The Life and Art of Harry and Jessie Webb (Mother Tongue $34.95) will open at the West Vancouver Museum on September 16 and continue to November 8, 2014. It’s called Art in the Age of Jazz: Harry Webb and Jessie Webb.

A BOOK LAUNCH will be held at the Ferry Building Gallery on June 21 in West Vancouver, 1414 Argyle Avenue, at 7:30 pm.

As the daughter of these bohemian parents in Vancouver, Adrienne Brown has published and account of their contributions to the culture of B.C., The Life and Art of Harry and Jessie Webb (Mother Tongue 2014), for book number seven in the ongoing Unheralded Artists of B.C. series.

Best known for their prints made with linoleum blocks during the 1950s, the Webbs were associated with the ferment of both the Vancouver School of Art and the The Cellar jazz club at 2514 Watson Street, near Main and Broadway, where pianist Al Neil led the house band.

For many years the Webbs lived at Dundarave Beach in West Vancouver. Also a landscape architect, Harry Webb designed the Park and Tilford Gardens that opened in North Vancouver in January of 1969. The pair were also briefly associated with a venture to open a bookstore in West Vancouver called the Pick-a-Pocket Bookshop at 2442 Marine Drive along with Stephen and Elsa Franklin, and Jim and Alice Munro (who lived nearby, up the hill). That intiative sparked the Munros to open their own bookstore that was relocated to Victoria.

Harry Webb arrived in Vancouver in 1946 as a newly minted teenage veteran who had served in the Canadian Merchant Marine. Buoyantly sociable, the couple attended many costume balls and parties while earnestly pursuing their artistic careers. Harry Webb was involved in the founding of the British Columbia Society of Landscape Architects. He formed a successful design company called Justice & Webb.

Adrienne Brown is a landscape architect and writer who lives in North Vancouver.

PHOTO BELOW: PATRONS OF THE CELLAR Harry and Jessie Webb were founding members of the Cellar Jazz Club in Vancouver.

2 Responses to “And the beats go on”