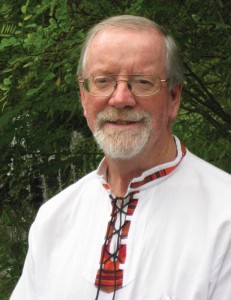 Swimming With Turtles: Spirit of Place (Thistledown $17.95), find Doug Beardsley‘s collection of contemplative narrative poems, was inspired by several sea voyages in the Carribean, the Gulf of Mexico and the Pacific Ocean. It will be launched with a reading and book signing at Munro’s Books in Victoria on April 9 at 7:30 pm.

A fixture in the Victoria literary scene since 1974, Doug Beardsley is a poet who collaborated with Al Purdy on two non-fiction titles — one about about D.H. Lawrence and the other about John Donne — and he corresponded with Montreal poet Irving Layton for 35 years. Beardsley also wrote Country on Ice, an analytical book that celebrates hockey as an essential component of Canadian culture, and he has edited anthologies pertaining to hockey. He began teaching at the University of Victoria in 1981.

Born in Montreal on April 27, 1941, Beardsley earned a Bachelor’s degree in Creative Writing from the University of Victoria and a Master’s degree in English from York University. Long active in a variety of sports as a coach and a player, Beardsley also played drums in a jazz trio. He has lectured and taught at the University of Dijon, the University of Bordeaux, Victoria Indian Cultural Centre and the University of Victoria. Beardsley has also worked as an editor and assistant editor at The Tribal News in Victoria and The English Quarterly at York University. Since 1985 he has been involved in writing and editing with Beardsley and Associates in Victoria. His works have been widely anthologized, he was shortlisted for the Dorothy Livesay Poetry Prize in 1989 and trees were planted in Israel in 1996 in recognition of his services to Holocaust remembrance and education.

The Rocket, The Flower, The Hammer, and Me (Polestar Books, 1988)
Our Game: An All-Star Collection of Hockey Fiction (Polestar Books, 1997)
The Man Who Outlived Himself: An Appreciation of John Donne, a dozen of his best poems (Harbour Publishing, 2000). Edited with Al Purdy.