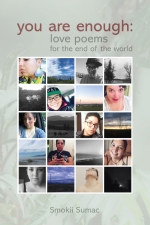 Two-spirit, transgendered educator Smokii Sumac of Kimberly has been shortlisted for the 2020 Dayne Ogilvie Prize for LGBTQ emerging writers.

Sumac is a member of the Ktunaxa nation, a Ph.D. Candidate at Trent University and a faculty member at College of the Rockies Cranbrook.

His 2018 debut book of poetry enough: love poems for the end of the world (Kegedonce $15) won the Indigenous Voices Award for poetry. The poems are a selection of works from his two years of writing poetry almost daily and that deal with subjects such as addiction and depression, coming home through ceremony, and falling in and out of love. The collection is also a reflection of two years of life as a Ktunaxa Two-Spirit person, sometimes funny, other times sad.

Judges for the $10,000 Dayne Ogilvie Prize said Sumac’s poetry had “precise analogies and rhythm that move the spirit.” They also were inspired by his poetic practice that “harkens to those who came before him. 9781928120162

About the Prize
Robin Pacific established the prize in 2007 to honour her late friend, Dayne Ogilvie, who was a respected editor, writer, literary manager and passionate lover of all the arts. The Dayne Ogilvie Prize rewards LGBTQ writers of any age who are in the developing stages of their career and whose body of work to date demonstrates great potential. Past winners of the prize include Michael V. Smith, Zoe Whittall, Farzana Doctor, Kai Cheng Thom, and, most recently, Lindsay Nixon. The 2020 prize is gratefully supported by one anonymous donor.