Tolstoy’s Words To Live By 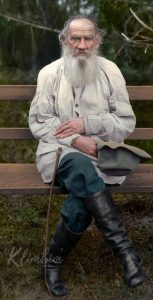 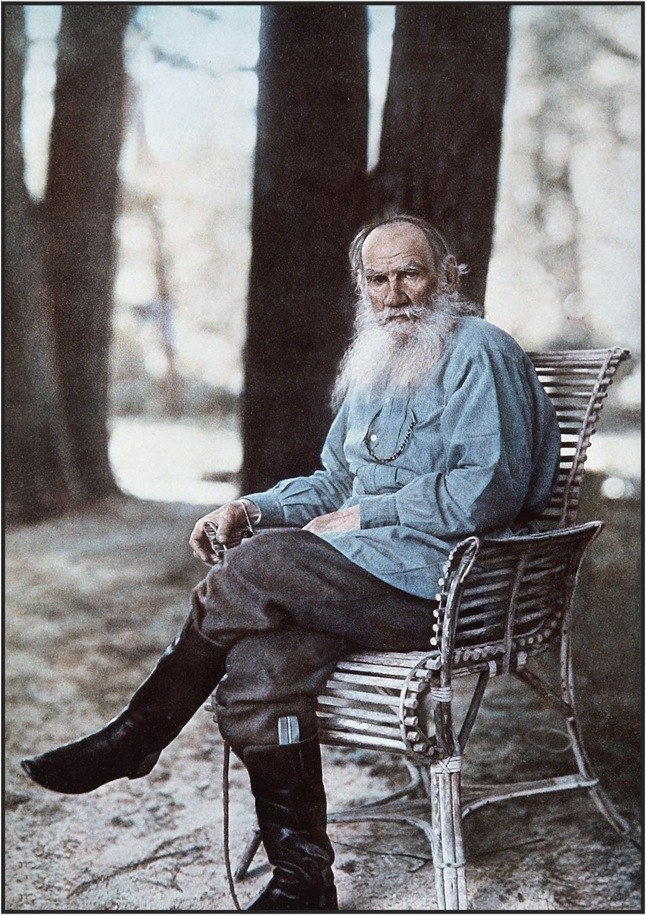 The first colour photo taken in Russia is this Sergey Prokudin-Gorksy image of Leo Tolstoy in 1908. (1)

Leo Tolstoy’s role as the world’s first global thinker will be brought to light in May of 2020 with the release of Tolstoy’s Words To Live By: Sequel to A Calendar of Wisdom (Ronsdale $29.95).

Never before made available in English, this version of Leo Tolstoy’s first collection of “Daily Thoughts” was originally published in Russian in 1903.

Determined to find higher moral ground, Tolstoy developed his own form of Christ-inspired radicalism that made him revered the world over—and feared by the Russian czar and Orthodox Church authorities who could not control or silence the author of War and Peace.

In his final decade of life, when Tolstoy ultimately fled his home and set off King Lear-like to escape from his wife, he devoted himself to becoming one of the first intellectuals to consistently seek the cross-cultural wisdom of as many great thinkers as he could, from all centuries. 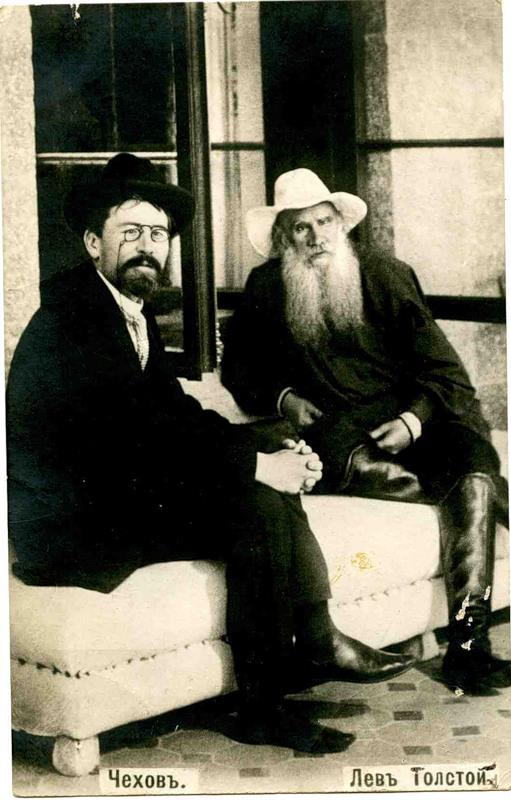 Anton Chekhov and Leo Tolstoy were friends but Tolstoy thought Chekhov’s modernist plays, in which characters were frequently ambivalent, were “even worse than Shakespeare.”

Among those who were profoundly influenced by Tolstoy were a young Hindu lawyer named Mahatma Gandhi and a young preacher in the Southern U.S. named Martin Luther King. Gandhi described himself as being “overwhelmed” by Leo Tolstoy’s “independent thinking, profound morality and truthfulness.”

By sharing aphorisms and ideas with people around the world—providing uplifting thoughts for each day of the year—Leo Tolstoy went viral, one hundred years before the internet.

Now, re-discovered and revived by two Canadians, here is the first compilation of once-suppressed ideas that led Tolstoy to produce three more collections before his death in 1910.

Tolstoy’s Words To Live By is a vibrant, unprecedented work of scholarship and lively writing that shows why, in his twilight years. Tolstoy believed Anna Karenina were far less important to the world than his inspirational distillations of wisdom.

“The life of a person without faith is the life of an animal.” – L.T. 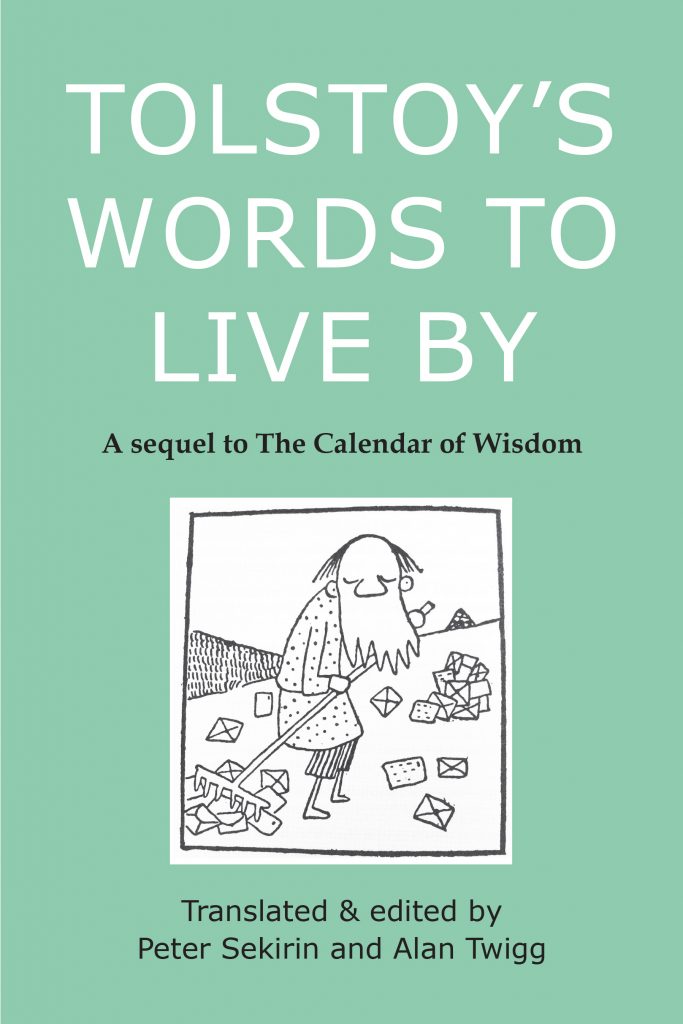 This ‘dummy’ cover features a cartoon of Tolstoy that was drawn in Russia in the early 1900s.

FROM THE PREFACE: ABOUT LEO TOLSTOY

Leo Tolstoy tried to radically raise his moral standards towards the end of his life.

He became a vegetarian and a teetotal. He attempted celibacy. He gave up hunting. He gave up smoking. And he stopped handling money as much as it was possible.

He increasingly adopted the attire of a peasant, took daily instructions from a shoe-maker to learn a useful trade and, like a Russian Aesop, wrote fables for the children of his serfs, encouraging a program of literacy at Yasnaya Polyana, having been writing articles about education methods since the 1870s.

Tolstoy concluded it was impossible to live as a true Christian in conventional Russian society.

In the 1880s he dropped his title of Count and requested his servants address him as plain Leo Nikolayevich. To alleviate distress caused by the famines of 1891 and 1898, Tolstoy and his children organized and administered soup kitchens, feeding hundreds of thousands who might have otherwise died.

Long before Bill Gates, Tolstoy opted to distribute large portions of his own family’s wealth to charitable endeavors (much to the alarm and despair of his wife) and he inspired some of his fellow landowners to rescind ownership of their vast properties. Dozens of agricultural colonies, similar to the modern kibbutz, sprang up around Russia, organized by disciples who attempted to carry out Tolstoy’s views. (1)

In support of the agrarian sect of “spirit wrestlers” known as the Doukobors—who burned their weapons in 1895 to protest universal military conscription—Tolstoy nominated the Doukhobors for the Nobel Peace Prize and raised funds from wealthy friends. Eventually, he donated all royalties from his final novel, Resurrection, to help his son, Sergei, expedite and escort 2,300 Doukhobors by ship to Canada in 1899. 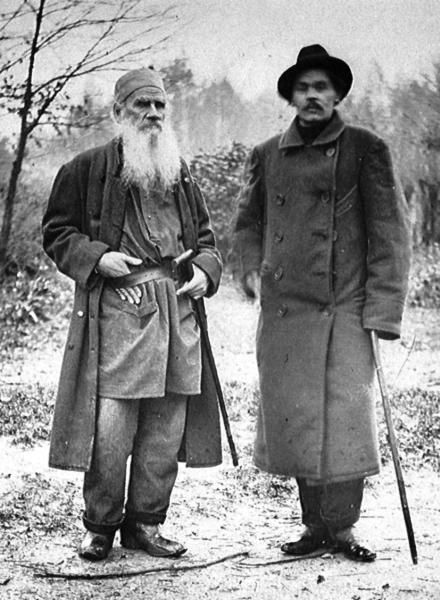 In support of Jewish families who suffered during the Kishinev pogrom (2) in April of 1903—a major turning point in Jewish history—and in support of their migration to the United States, Tolstoy agreed to have three of his stories included in Help: An Anthology for Literature and Art (Warsaw, 1904) [Hilf: a Zaml-Bukh fir Literatur un Kunst] edited by Sholem Aleichem, the pen name of Solomon Rabinovich, the Yiddish short story writer and playwright who gave the world Fiddler on the Roof . (3)

In keeping with his ever-evolving anarchism, Tolstoy resisted involvements with organizations as much as possible. When followers of his own ideas became fanatics, he was appalled. And yet he allowed all manner of beggars and lunatics to have access to him on his family estate.

Only his global fame, and the fact that he corresponded with major literary and political figures around the world, kept him out of prison.

Tolstoy vigorously attacked the Russian Orthodox Church as false and corrupt. He openly sought the demise of the Russian government. Fearlessly, Leo Tolstoy became the most outspoken critic of the Russian Czar. Most importantly, Tolstoy developed his own doctrine of peaceful civil disobedience,

By the time he had completed his magnum opus among his religious works, The Kingdom of God is Within You, in May of 1893, Tolstoy had written 13,000 manuscript pages, more than all the pages of his three major novels combined. Banned from distribution in Russia, The Kingdom of God is Within You deeply impressed a young Hindu lawyer working in South Africa named Mohandas Mahātmā Karamchand Gandhi.

Inspired by Tolstoy’s writing, including The Law of Love, The Law of Violence, Gandhi proceeded to lead or initiate non-violent protests, strikes and other forms of peaceful resistance that resulted in the independence of India in 1947. 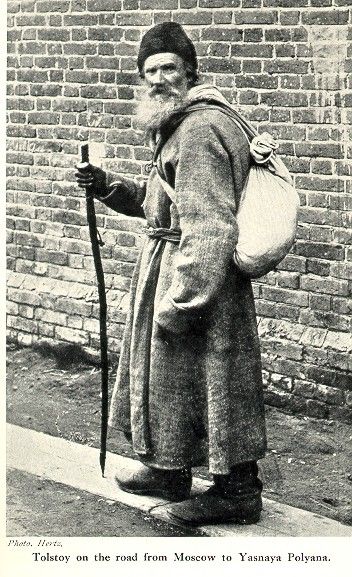 Tolstoy once walked from Moscow to his home 200 kilometres away at Yasnaya Polyana (“clear glade”).

“Tolstoy’s The Kingdom of God is Within You overwhelmed me,” wrote Gandhi. “It left an abiding impression on me. Before the independent thinking, profound morality, and the truthfulness of this book, all the books given me by Mr. Coates seemed to pale into insignificance.” (4)

Tolstoy’s credo of non-violence would soon have a similar impact on a young preacher in the southern U.S. named Martin Luther King. In the wake of the Civil Rights movement that ended lynchings and segregation, more peaceful marches in the 1960s ultimately led to the cessation of the Vietnam War.

Leo Tolstoy, as an inventive moralist, went “viral” one hundred years before the internet but today he is recognized primarily as a novelist—as an entertainer. This would not please him.

For the last three decades of his life, Tolstoy’s moralism took precedence over his art. Initially inspired by the lessons of Jesus Christ, Tolstoy was one of the first intellectuals who sought the wisdom of as many great thinkers as he could, from all centuries.

With his determinedly multi-faith approach to wisdom, Tolstoy collaborated on a Russian version of Lao-Tze’s Tao Te Ching, read Confucius as much as Aristotle and made himself familiar with the sages of Japan. Tolstoy was fluent in English, French and German, and he could read in Italian, Polish, Serbian and Czech. He also studied Greek and Old Church Slavonic, Latin, Ukrainian, Tatar, Turkish, Dutch, Bulgarian and Hebrew. It has been suggested his belief system had more in common with Buddhism than with Christianity.

But the underpinnings of this book, Tolstoy’s Words To Live By, are also emotional. As much as King Lear wandered dazed on the heath, Leo Tolstoy struggled to incorporate his ideals into his private practice, and the resultant friction between his public beliefs and his private practices kept him in constant turmoil.

Tolstoy sought solace and sustenance from great minds because he himself increasingly suffered disappointment in himself—and possibly shame—due to a desperately deteriorating relationship with his long-suffering wife.

Tolstoy’s private agonies and personal failings in no way diminish the validity of the wisdom he collected.

Emotional strife served as the catalyst for him to seek and find truth, in the tormented hope that he could be liberated by it.

Brother Francis was walking with Brother Leo, from Perugia to Portiuncula, on a very cold winter’s day. Francis said, “Brother Leo, it would be nice if our brothers could give examples of holy love for all the world but—write this down—this would not be the complete fulfillment of joy.”

Shivering, they walked further. “Please write this down, Brother Leo,” Francis added, “that if our brothers could heal the sick, cast out demons, and make the blind see, even then, this would not be complete joy.”

A bit later, Francis said, “Write this, too. If we could speak all the languages of the earth and know every science, and if we could talk to the angels, and get all the treasures of the earth and understand all the mysteries of the stars, the birds, the fish, all mankind, the trees, the stones, and the waters; even then, this would not bring perfect joy.”

“Then how can we have perfect bliss?” Leo asked.

“We will know perfect bliss.” Francis answered, “when we arrive, cold, tired, and happy at our destination. We will knock at the door, and the pub keeper will scold us and refuse to open the door, and we shall say to ourselves, ‘God Himself told this man to say this.’ When we wait until the morning in the snow, slush, and wind, cold and drenched, without any feeling of malice for this man, we shall pray for him. Only then will we know perfect bliss.”
Leo Tolstoy 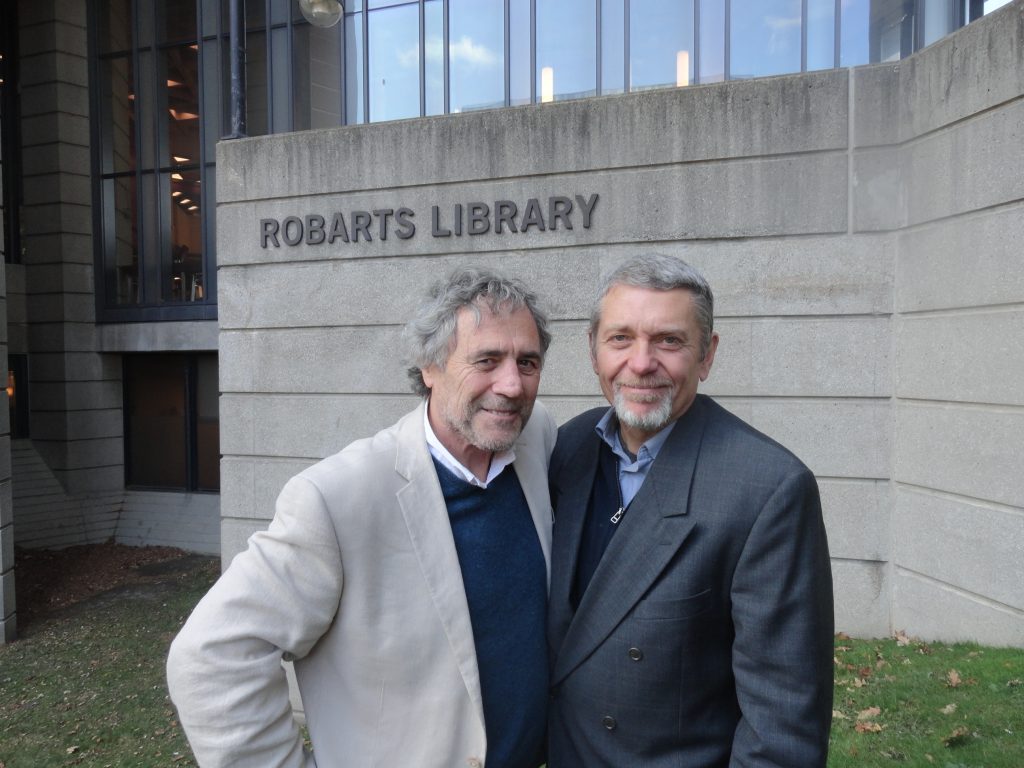 PETER SEKIRIN (right) has a Ph.D. in Comparative Literature from the University of Toronto. He has translated and edited works by and about Anton Chekhov and Fyodor Dostoevsky. Peter lives in Aurora, Ontario.

ALAN TWIGG (left), founder of BC BookWorld, has written sixteen books and produced six films. He was inducted as a member of the Order of Canada in 2015. He lives in Vancouver, B.C. www.alantwigg.com.

“What can be more precious than to communicate every day with the wisest men of the world?” – L.T. 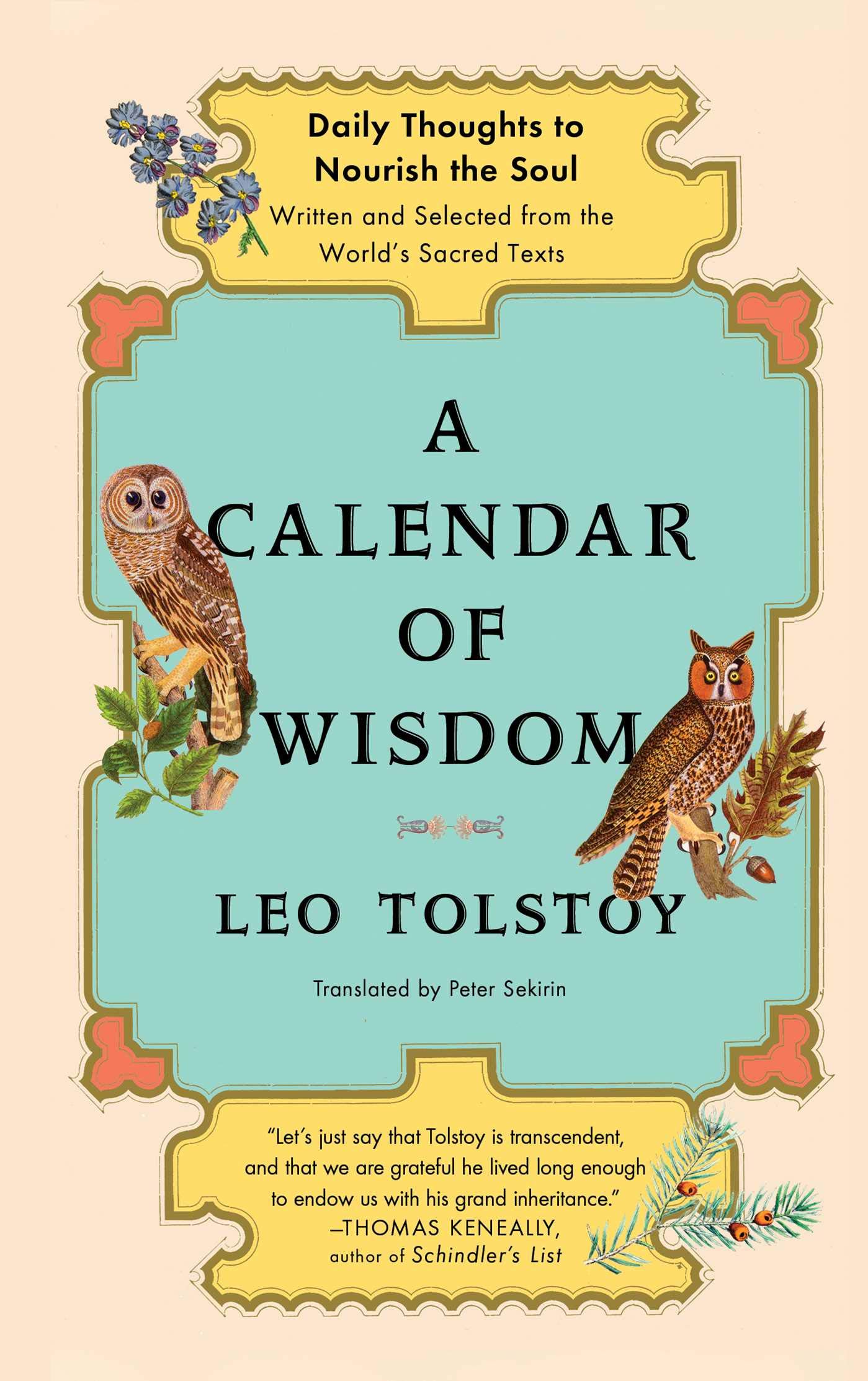 Peter Sekirin’s previously translated book has been a bestseller around the world. Although Tolstoy’s Words To Live By appears as a sequel, it was actually produced by Tolstoy prior to A Calendar of Wisdom. 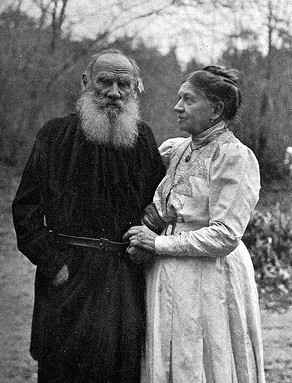 This is the final photo of Tolstoy with his wife Sophia in 1910 before he famously left her and died in a railway station. She rewrote War and Peace by hand nine times.