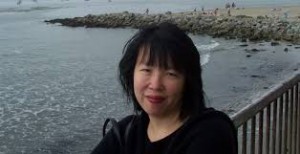 Evelyn Lau walks this stretch of seawall several times a week, often composing poems, including “Quayside”. Born Evelyn Yee-Fun Lau in 1971, she received the Pat Lowther Award from the League of Canadian Poets for best book of poetry by a woman in Canada, for Living Under Plastic, containing “Quayside”, in 2011, the same year she was named City of Vancouver’s Poet Laureate. As a fourteen-year-old honour student, Lau had run away from her restrictive upbringing to survive for two years as a teenage prostitute and drug user. Her teenage memoir Runaway: Diary of a Street Kid, received much publicity and became a CBC movie.

[The bed of crushed mussel shells, bruise-black,
the silent glide of the scarlet freighter,
the wind slapping my face awake
to the world somersaulting blue and brazen –
I am gulping the air flavoured with metal and shellfish,
stretching to take it in, salt sting, sea grass,
gold pollen detonating in the breeze, the profusion
of it, this life you returned to me, this one life.]

Born on July 2, 1971, Evelyn Yee-Fun Lau was an honour student when she ran away from her restrictive Chinese Canadian parents at age 14 and became a teenage prostitute and drug user. Her teenage memoir of two years on the streets, Runaway: Diary of a Street Kid, received much publicity and became a CBC movie. At 20 she won the Milton Acorn Memorial 1990 People’s Poetry Award for You Are Not Who You Claim, her first book of poetry. She has also been nominated for a Governor General’s Award for Poetry for Oedipal Dreams and she received a Canadian Authors Association Award for Most Promising Writer. Her prose books, mostly concerned with the rigours and sado-masochistic dramas of sex, have been translated into more than a dozen languages. “What is important, I think, about Evelyn Lau,” wrote critic Patricia Pearson in 1993, “is that she blends startling prose talent with a fierce determination to be true.” Unfortunately that combination led to a non-fiction expose of her ruined love affair with writer W.P. Kinsella, a relationship that began when he was 60 and she was 24. The article in Vancouver magazine called ‘Me and W.P.’ led to a lawsuit in 1988, diminishing respect for both literary talents. The writers had signed a pact giving one another permission to write about their relationship, but Kinsella alleged that Lau’s portrait of him was malicious and erroneous.

Female protagonists in Evelyn Lau’s Choose Me (1999) repeatedly blame the older men in their lives for their unsatisfying relationships. Consequently some readers will judge her heroines less charitably than the ex-prostitute they encountered in Lau’s memoir of teenage despair, Runaway, ten years ago, when she was 18. “She was not only without desire,” Lau writes in ‘Faithful Husband, “she was repulsed….He smelled off to her, a combination of sour musk and something vaguely fecal… With each jolt of his orgasm her spirit crumpled.” In ‘Suburbia’ she writes, “She didn’t feel much of anything, only blank and detached.” In ‘In the Desert’, “Henry was twenty years her senior… Joan never told Henry how the desert bored her… When Joan tried to picture what he might be thinking about behind his pink, oily forehead while rubbing his flaccid penis against her vulva, as if her warm, alive body was a blow-up doll’s, she wanted to vomit… She felt what by now was a familiar rush of pity and hatred.” Only in the concluding novella ‘Heaven’ does a female narrator named Annabelle begin to accept responsibility for her own unhappiness. She seriously examines her immature, shallow and covetous attitude towards a privileged, blond and elegant woman whose husband has killed himself. This awakening of culpability comes as a relief to the reader.

The road beyond victimology is hard, especially when agents, editors and publishers lay in wait as potential substitutes for pimps. The saving grace is that Lau writes courageously and well–one of precious few Canadian authors who try to describe all aspects of sexuality frankly. In 2011, she received the Pat Lowther Award from the League of Canadian Poets for best book of poetry by a woman in Canada, for Living Under Plastic. In October of 2011, Evelyn Lau was named City of Vancouver’s Poet Laureate. In 2013 Lau was shortlisted for the Dorothy Livesay Poetry Prize for A Grain of Rice (Oolichan 2012). A brave and undeniable talent.

Between 2004 and 2015, more than 10,000 demolition permits were issued for residential buildings in the city of Vancouver. As of 2015, an average of three houses a day were being torn down, many of them original homes built for the middle and working class in the 1920s, ’30s and ’40s. Very few are deemed significant enough to merit heritage protection, but Caroline Adderson and other Vancouver writers believed the demoliton of these dwellings amounted to an architectural loss. She therefore spearheaded Vancouver Vanishes: Narratives of Demolition and Revival (Anvil 2015), co-authored with John Atkin, Kerry Gold, Evelyn Lau, Eve Lazarus, John Mackie, Elise & Stephen Partridge and Bren Simmers. The introduction is by heritage artist and activist Michael Kluckner–who has published a book called Vanishing Vancouver–and photographs are by Tracey Ayton and Adderson.

I liked Evelyn Lau’s Choose Me a lot. I admit to having known her when she was just getting over being a hooker (and told her to get out of spandex and mini-minis and wear skirts to her knees to please her new market). The Social Service bureaucrats in Victoria wanted all of the ten thousand dollar advance on her first book, saying she owed it to them because she’d been on their rolls since she was fourteen. The head woman wouldn’t talk to me. A ten thousand dollar advance for a book written by a child in care? All the lights went out. They could cope with anything but success. Their lawyer, with the voice of an older man, called her a slut and other Protestant names, implying that she was someone who should not be published but should probably be put in jail. He sounded to me like someone fearful of being named in her book.

Lau produces a serious work of poetry or prose nearly every year. It’s her day job. In the past, and even occasionally now, critics, even politically correct ones who know social pressures and bad parents put her out onto the street, although they try not to, still sound as if they are holding their noses and breathing through their mouths when they write reviews of her work. It appears that other authors can work specific turfs, but someone who writes about people whose lives are completely, and not always joyously, concerned with sex is often suspected of being Politically Incorrect. Lau knows what she knows, take it or leave it.

Evelyn Lau gets lost in contemplation

Like her earlier books, Evelyn Lau’s Living Under Plastic is not a light read. The plastic refers on one level to people living in condos that are under repair. At another level, it’s the muffling and claustrophobia induced by a heavy blanket of regret and grief.

Everyone has a personal or family cancer story these days, but few have written their stories so well. Lau describes in painful detail the death of a favourite aunt on a palliative care ward and it is grim. Cancer is our contemporary plague and most of us are trying hard to keep down the fear. This poet brings it right in our face and shakes the readers’ numbness. That’s what poets do. One of the functions of the poetic imagination is to keep on bringing the grief to our awareness.

We don’t have a legitimate place in our culture for lament.

In many of these forty-five poems though, Lau’s lamenting seems more like depression. The two are quite different. Lamenting clears the emotional fog while depression deepens it. In the third and last section, the absence of friends and mentors and parents becomes unrelieved. Every poem is about some adversity and connected with death; even the last elegant piece about heron returning. So little affirmation!

As Lau tells her stories, the reader is subject to confusion. These seem like narratives but key pieces of information are withheld. Is this reticence sloppiness or is it a form of tease? There are so many inclusions of “you,’ “he,” “she,” “we” without clear references. Who’s dead, who’s dying? |The grandfather, aunt, uncle, mother, father, friend D. or P. or the mentor doctor or more than one at a time?

The chronology confuses and one feels a little locked out. It’s not that a poet needs to be explicit about these details but the reader, carried into caring about a friend or a parent, is astounded to discover the poem is actually about yet another death. Leaving out key linkages does not increase interest, it alienates.

Travel is a way to temporarily leave behind one’s wearying identity. Lau travels to sunnier places; Santa Monica, Phoenix, the Grand Canyon, Oregon, but her disposition does not get sunnier. In the airport, as she’s going home, she identifies her mood as heavy and still dissatisfied.

The poems set in Vancouver—all grey tall buildings, sea and beaches, white gulls wheeling—evoke a distinct sense of place. Lau has lived in this city most of her life and she captures its wintry moods. From her downtown apartment, the treetops are clouds though her rooms feel like a prison.

Honesty about shopping as an escape is admirable. Lau admits that it’s not more stuff she wants, but rather something elusive. Is there a mall somewhere that sells gratitude?

Many scintillating lines in this collection show Lau has lost none of her former poetry skills. “I screamed for the silence of the monastery.” “My breath a kettle puffing small clouds of steam.” “A storm of starling overhead, sheet music in the sky.”

Lau’s younger writing was more obsessive about love relationships and chronic loss. Older but no happier, she shows a possible development as a contemplative. A little more in control of her own dependencies, this poet yet may arrive at hope, “that thing with feathers,” according to Emily Dickinson, “that perches in the soul.” It’s not a raucous gull.

It’s all anyone could want
or ask for, a glimpse of the eternal,
the possibility of something more,
like an aperture opening
onto heaven. Yes, like this __
to be transported outside yourself,
to be anchored to this earth
yet flying.

Mayor Gregor Robertson will welcome Evelyn Lau as Vancouver’s third Poet Laureate at a ceremony on Saturday October 22 at 5 p.m. at the SFU Goldcorp Centre for the Arts (149 W. Hastings St).

To attend the October 22 event, please RSVP to jonathan.taylor@vancouver.ca.

Ms. Lau plans to raise the profile of local poets and bring poetry into public spaces and public discourse, continuing the work her predecessor. She will also meet with aspiring poets in the community through a series of poet-in-residence consultations and continue to work on her sixth collection of poetry.

Evelyn Lau was born in Vancouver in 1971 and is the author of five volumes of poetry, two works of non-fiction, two short story collections and a novel, with works translated into a dozen languages worldwide.

Runaway: Diary of a Street Kid, published when she was 18, was a Canadian bestseller and was made into a movie. You Are Not Who You Claim won the Milton Acorn People’s Poetry Award, and Oedipal Dreams was nominated for the Governor-General’s Award for poetry. Her poems have been included in Best American Poetry and Best Canadian Poetry and received a National Magazine Award. Her most recent collection, Living Under Plastic, won the Pat Lowther Award for best book of poetry by a woman in Canada.